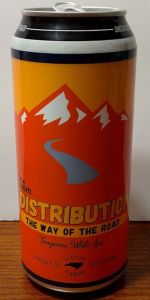 A: Pours a very lightly hazy medium golden honey in color with moderate amounts of active visible carbonation and faint golden yellow + apricot highlights. The beer has a finger tall foamy light beige head that reduces to a couple of small patches of medium thick film surrounded by a large patch of thin film covering the remainder of the surface of the beer and a medium thick ring at the edges of the of the glass. Moderate amounts of lacing are observed.

M: Just shy of medium bodied with moderate amounts of carbonation. Hints of dryness in the finish.

O: The addition of tangerine really adds to my enjoyment of a Belgian IPA (probably my least favorite of the different IPA styles because I feel the yeast generally is too dominant). Easy to drink and enjoyable. I could easily have a couple of these.

Slightly hazy gold with a white head that left very little lacing. Huge tangerine blast when you smell this one. There is also some malty sweetness and some pine in the nose. The beer tastes sweet up front with a lot of tangerine and finished clean with a pith and pine bitterness. I am sorry this is an anniversary beer as it is one of the best I have had from Deep River.

Apr 17, 2016
Team Distribution The Way Of The Road Tangerine White IPA from Deep River Brewing Co.
Beer rating: 3.64 out of 5 with 3 ratings