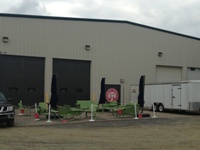 This is a metal bar/brewery, blasting death metal at all times; I dig that but some people might not.

Cool laid back vibe and bartender was super nice, they had a huge selection and almost every beer I tried and took home was great. Would definitely like to go back here and have more from them.

Plain old ugly sort of grey day in an industrial park-I could see how they'd be jumping in spring and summer-outdoor area and all. Inside is your pretty standard tasting room. Over to the right are some sofas and plush chairs. Everything I had was excellent however there were 9 RIS and 9 gose and then a few IPAs. Not a really broad spectrum of styles but what they were doing this day they were doing damn well and I cannot fault them for that. Service was fine. Love these guys and love their beers since I discovered them. If you're in the area well worth a stop for fresh beer and to load up on.

Stopped in here because I have been meaning to for a while now. The place isn't air conditioned so the vibe is immediately taking a hit because of that. The server was nice and she gave recommendations on things she liked. The beers were pretty good, they had a shit load of beers to choose from but a lot of them kind of tasted similar to me. Overall I liked the place but really wish they had a better taproom area where you're melting in the summer heat drinking 11% Imperial Stouts with Hot Peppers brewed into them.

Our group stopped here during a day-long pub crawl to try their beers. The brewery is located in an industrial park setting in half of a dual-occupancy building. The entrance to the tap room is at the rear of the building. Limited parking is available at the back, otherwise parking is available at the front. The interior is industrial with some wood siding on the wall to soften the look. Beer is ordered at the bar. There is no seating at the bar, but standing is okay. An overhead door opens to a concrete patio where there are several tables and some large umbrellas.

Twelve beers were on the menu (there are 24 taps) but only 10 were available, and we ordered a sampler flight of only three beers knowing that we were visiting many other places that day. Of the 12 beers on the menu, 5 were IPAs or DIPAs, one was a Saison, and 6 were a base Gose plus what looked like 5 cocktail versions of the Gose. One DIPA was out along with one cocktail Gose. We chose a DIPA, a run barrel-aged black IPA and the Blue Hawaiian cocktail version of the Gose. The cocktail Gose tasted like Hawaiian Punch straight from the can, and the other two were equally tasty. We gave an overall B grade to these beers, although none were placed in the exceptional category.

No food is served here although packaged snacks are available. The beers are very good which makes this a place that is highly recommended for a visit.

Got to brew with these guys, so spent the day there. Very eccentric spot, got to try all their stuff and look forward to the expansion of the tasting room and new and improved 10 barrel system

I finally made it to Purcellville! Seriously, there is a lot going on in this little town as far as beer goes, and I'd have to say Adroit Theory was my favorite place that I visited on the LoCo Trail. It's a lot bigger than I expected, in a well-refurbished warehouse. There's a good-sized bar with plenty of table space, including an ample outside seating area. The crowd was a bit of a turn-off, with some major broseph action going on, but oh well, it's not the brewery's fault. The taplist was out of this world, which for me was a good and bad thing, bad in that I was driving and with many of the brews being high octane, I had to seriously limit my intake. I sipped on a few mini snifters, making my selections as wisely as I could. These guys are definitely not strangers to experimentation. I sampled a maple bourbon IPA (okay, maybe not "wisest" as possible there, but I had to know, and it was in fact pretty good), a white chocolate macadamia stout, and a caramel macchiato stout. Yes. Only scratched the surface. Tons of bottles for sale to take home, so I grabbed something evil looking, which I will pop open on a rainy day. Service was fine, mainly I think because there were so many people behind the bar.

This place is a three hour drive from me. I went on a whim, rerouting my road trip to NC/TN, but I actually think I might just do a day trip soon to check them out again and sample more of their brews.

The location is pretty nice despite being located in the far reaches of Loudon County. The location has a bar in the inside with an outside patio that's open during warmer weather. Parking is a bit of a pain because they share their parking lot with a construction company but since their major days are during the weekend, parking near the structure shouldn't be too bad.

The brewery doesn't sell food but you can order take-out and they seem to have an assortment of cheesecakes for sale that they've paired with their beers. When food is available, it's usually part of some event they're hosting.

The beer selection is nothing short of phenomenal. There's always something new each weekend and a few regulars that manage to stay on tap. In addition, Adroit Theory also has some of their stuff in pint bottles you can purchase.

Place was incredibly crowded when I arrived and was a mix of poseurs and younger white class workers. Staff was extremely attentive and helping customers through the selections explaining the beers which did add to the wait but at least they didn't just blow off the clients. Although some of the poseurs puffed up and played it out longer in an cloying and annoying manner. No fault of Adroit Theory though. Had four tasters, including Blvck Celebration Imperial Porter rum barrel aged, Death of Chuthlu BBA Russian Imperial Stout, Lux Wheatwine BBA, and Brooks Current Obsession Imperial Porter. All were good but Lux was outstanding, brought home two bottles.

cbbjr from District of Columbia

Went on a Saturday and they had somewhere between 20-30 beers on tap. My group sampled 10 of them. A couple misses, but overall the beer was pretty solid. My only complaints were that growler fills were all $25, which I suppose could be reasonable for some barrel aged or specialty beers, but the one I liked the most was a fairly low ABV milk stout - no way I'm paying $25 for a growler of it. And the price of empty growlers was ridiculous. Also, the anti-establishment, industrial vibe is a little strange when there are a bunch of middle aged white guys sitting around drinking and pouring the beer (myself included). Would definitely go back, but not a place where you are going to want to take a lot of stuff back home.

Great atmosphere in the back of a warehouse. Fantastic selection - seems like they concoct something new every week. Major bonus points for the creative names and brews that deserve them. Only complaint is Purcellville is too far out of the way!

Excellent brewery in Northern Virginia. Not afraid to step out of the box a little. Always something new on tap. Excellent service. Great place to get great beer.

For an industrial park setup in a small town in Northern VA, its actually a pretty fun place to visit. Really nice inside and outside setup. Visited on a Friday afternoon around 2pm and the place was very crowded. Great options of small samplers (in nice little mini-tulip glasses, draft, bombers to go and growler fills. Didn't order any food (not sure they have any). Worth a visit for the experience. Beers seemed so/so. Like the labels and pagan/cult theme to their beers. Like going to a Alice Cooper or Iron Maiden show for entertainment value.

The atmosphere was a little lacking though - the service was...okay. No one was rude but no one was attentive either. I'll definitely go back, but I've also been to better breweries.

An amazingly funky location, with a staff that are so knowledgeable and friendly that I feel like I have walked into a beer university. A philosophy that pushes beer to the extreme, this is the place to challenge your palate.

I attended the Strangeways Tap Takeover at Adriot Theory on 10/10/15. They had about 30 of their beers on tap, as well as 25 beers from Strangeways.

The brewpub seemed decent enough, but I really enjoyed their beers. Lately they have around 24 beers on tap every weekend.

Many of their beers are higher ABV, so you have to watch how much you drink.

The staff is snarky and some type of goth hipster vibe is alive and well here. The horrible service is only overlooked by the outstanding beers that they brew. They truly are adept at their craft.

The place is a basic taproom at the brewery site. You can see the production facilities, as they are, from the bar. The food offerings come from (presumably local) food trucks, but I did not try any. It is also a little hard to find, although they have added some campaign-style signs since our first visit.

The cinder block walls and gray steel rafters work for me. The back loading dock doors are opened as an entranceway. The sound system plays heavy metal music from the back. There are no TVs or other forms of distraction from the beer.

The team of servers are friendly and helpful and seem to be enjoying themselves. They appear to still be producing smaller batches. The beer itself is all high-gravity stuff (ala DFH early on?), and poured into 12 oz snifters (that look pretty cool). There is a bit of experimenting going on as well with spices and infusions. They have under 10 taps, and given their apparent production capacity, it's not surprising they've been out of a beer in each of our trips.

I will be returning from time to time, even though it is a bit of a drive (summertime will help). I think they are producing some good beer and want to see how they grow.

Adroit Theory Brewing Company in Purcellville, VA
Brewery rating: 3.97 out of 5 with 1108 ratings