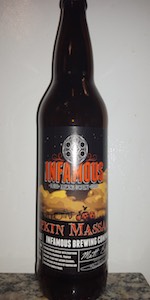 Appearance – The beer pours a deep dark brown color with a one finger head of tan colored foam. The head has a great level of retention, slowly fading over time to leave a small sum of foamy lace on the sides of the glass.

Smell – The aroma of the brew is heavy of a roasted malt smell with a good deal of pumpkin spice of cinnamon, clove, and nutmeg. Along with these smells comes a rather sizable pumpkin aroma as well as some sweetness of a caramel and molasses smell.

Taste – The taste begins with a roasted pumpkin and malt flavor that has notes of char and toast as well as some sweetness of molasses and brown sugar. Right from the start, there is a decent amount of spice with nutmeg and clove being the strongest, but with the presence of cinnamon in there as well. As the taste advances the spice sets stronger with more sweetness coming to the tongue as well as more brown sugar hits the taste buds. At the same time the roasted pumpkin and spice seems to fade a bit, all while the roasted malt gets stronger. A touch of an almost creaminess comes toward the end of the taste and with a little bit of wood, it leaves one with a rather pleasant roasted, moderately pumpkin pie-like taste to linger on the tongue.

Mouthfeel – The body of the brew is medium in thickness and chewiness with a carbonation level that is on the average as well. A thicker body and a higher carbonation would have likely been better for the mix of pumpkin, pie, and roast. All said, the feel was still OK.

Overall – A rather decent dark roasted pumpkin beer that isn’t over the top on the sweet or spice. Well worth a try if you are looking for a dark pumpkin brew.

Rated by lksamm from Washington

Rated by ChuletaTX512 from Texas

Rated by Realbeerguy from Oklahoma

Rated by DdogDallas from Texas

Reviewed by joeyfeets from New York

Rated by Getalegup from Texas

Aroma: Pumpkin pie spices, primarily cinnamon and nutmeg dominate the aroma. There are hints of brown sugar and sweet alcohol as well.

Taste: Opens with dark roasted malt, and a bit of char, suggestive of, although not to the extent, of a stout. As the taste progresses, pumpkin pie spices rise to the fore, nutmeg and cinnamon being most prominent, with an undercurrent of brown sugar and molasses. Roasted pumpkin flesh is also prominent. Finishes with lingering roasted malt, pumpkin pie spices, and a slight, mild sweetness.

Drinkability/notes: A pleasant example, very well-balanced, it seems almost restrained compared to some other "over the top" pumpkin ales. Would be ideal for a traditional Thanksgiving dinner.

Reviewed by Karibourgeois from Texas

3.5/5  rDev -0.3%
Dark and clear pour that is almost black with some brown highlights. Aroma is spicy with nutmeg being dominant. Taste has pumpkin flavor upfront backed by some light nutmeg, toffee, roasted malt and nut flavors. Light to medium bodied and finishes with a sugary pumpkin pie flavor.
Oct 04, 2014
Rated: 3.6 by jdwilliamson79 from Texas