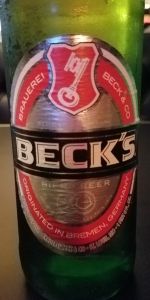 5% abv St Louis bottled in green glass -$15/12 pack in a box, so why not. pours slightly more golden than a Budweiser
Barely any aroma, head dies instantly, no life in the glass. Drinks like a basic lager made without corn or rice. Notice the difference in its clean finish and better feel than an add junk beer like pbr or hamms. Still pretty unremarkable, even compared to other Euro lagers, which this is not anymore, so it's now more like a bud without rice. Got a cheap pizza comin' and thought this would be the perfect match

Well I've had some of the higher-rated pilsners available and being my least-favorite of lager styles, it's no surprise this stuff is just awful to me. The smell, which translates into the flavor is pungent and (like Heineken) just offensive to my taste buds.

My personal favourite beer at the moment at the age of 21. Tried it first in Germany when i traveled there and its been great ever since in Finland too!

Beck's has always been one of my favourite European macro lagers. OK, sure, it has always been relatively cheap in Australia, but I've never found anything wrong with it, and it always goes down smooth and easy for me.

Taste: Taste follows through the nose, sweet pale malts, hints of lemon peel and grassiness from the hops. Slightly bitter makes it quite refreshing, slight bit of a metallic note, but given this has spent however many months sitting in a can since it was brewed, and shipped half way around the world it's to be expected.

I give Beck's a 5 across the board. It's my favorite beer. Such a good taste and aroma. Poured into a glass it has a beautiful color, nice head, and good smell. Tastes great. I enjoy a beer with a stronger flavor. German beer is my favorite kind.

I bought a can at beerstore in Ontario 500ml at 5%.
poured a 2finger head into glass.
looked good at the start but the head quickly disappeared and left the beer almost flat looking and the carbonation got slower .
taste is very light and easy to drink with a low bitterness .
overall an ok German pilsner beer.
cheers

Tastes like mineral water. Better than lite macro beers but still not much beer flavor.

This is not the swill haters portray, not even close. It’s merely an alteration of what once was. A Becks Light in 1976 would have tasted similar. Less booze than it once had and the distinctive skunky bite is still there but tempered. Becks is now made in USA by AB, and in my opinion now tastes a lot like a 1976 Budweiser, no accident I’m sure. Craft beer is great but for warm weather pounding it can get a bit heavy. This stuff is cheap, clean, crisp and tasty. Please drink responsibly.

veery hard to judge, not bad, not good - theres a place and a time for becks, incredibly 'so-so'

The aroma is skunky and grainy. Not very pleasant.

The flavor is very sweet, like shockingly so. No hops detected for any semblance of balance. Just sweet, grainy malts. Not "cloying", but definitely hard to get down. It's almost a bit medicinal, like cough syrup. But this doesn't get you high.

The feel is...like a typical light lager: crisp, yet watery. Drinkable, if not for the flavor.

Overall, not a good beer at all. Drank a couple of these at a friend's (less than 10 people, calm down). Only beer he had and it was free so no complaining. But definitely not something I'd ever pick up again if given the choice.

Adding a review to my scoring. Like another, I drank Beck's in the 70s and early 80s when, as I remember, it had some taste. Although it was not my favorite German at the time, it was better than Natty Boh. Fast forward to today . . . I guess this is made in a Bud plant in St. Louis. It is is very much lifeless . . . like Corona except nobody puts a lime in a Beck's. BTW, this was part of a beer club that my son gave me for Christmas. The club is supposed to give me hard to find German beers. The last two shipments had Beck's. Ugh.

The beer is a very pale straw. I cannot pick up a nose. I guess this is a plus as it does not have a foul odor. There is a faint taste of grain and malt. No hops. Light carbonation and body. Feels like seltzer. I hope I do not get this in the next hard to find German beer shipment. ;)

This was not good, period. I can't express how much I don't understand why this vegetal, buttery, cream corn mess is popular enough. There's plenty of other domestic-priced beers that taste the same if not better.

I used to really like Becks; I used to buy two ice cold bottles at my off-licence, walking home from the station after work, on a hot day and by jimeny, they tasted GREAT!
Since then; I bought two bottles from a local petrol station, yesterday; bottles looked similar to the old style, but on opening, the taste was nothing like ten years ago, I examine the label, now owned by Anheur Busch, oh no!
Then, the kicker, while being passed off as the original, this is , in fact , a 4% imposter, not the original 5%; the taste is vastly inferior and in fact I had to force myself to drink the second, after a prolonged struggle to down the first; why do these companies ruthlessly acquire breweries with a good name, only to reduce them to a phantom of their former quality.
I was pretty damned upset, that an old reliable quaff of german lager, has gone west, to the graveyard of liquid refreshment.