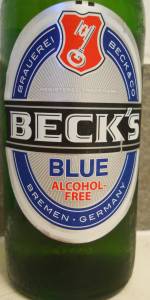 Overall
It started with promise but I could not finish.

I tried this chilled from the green bottle in a glass
The color is brilliant clear golden with thick white head with lasting retention and lace that collects.
The smell is somewhat fruity with a mild mineral aroma and gentle grainy odor.
The feel is light gently bitter with dry quality and moderately high carbonation
The taste is good with a mostly malt dominant flavor with light yeast quality and subtle bitterness in the back which could just be carbonic acid. There is a mild sweetness as it finishes but mostly dry overall.
The Overall impression is this is a good low alcohol beer, it is not impressive but is enjoyable for what it is.

Pale gold with two fingers of quick fading head. Lots of fine bubble lace.
Smell is malty and skunky hops.
Taste is sweet and light herbal grassy hops.
Mouthfeel is thin and light. Finish is mostly sweet.
Overall not the best in this class. Bet by date: 10-19.

A buddy of mine left a few of these at my house following a party so I thought I'd try it in an attempt to curtail my midweek drinking.

Actually looks quite appealing in a pilsner glass and the nose is inoffensive. Tastes a bit thin but not too bad. As expected, the mouthfeel is a letdown, as is the finish; a bottle of Perrier has more body than this. I haven't had much experience of alcohol free beers but, rated within the style, this is ok I guess.

Probably would have never tried this, but my wife ordered a bottle to be sociable at the pub and ended up giving me half. Pours pale straw...one of the palest beers I've seen. Some soda pop head, but it goes away quickly. Nose is actually interesting. Grainy as you'd expect, but fresh with a lot of citrus. Taste is watery and light, but on the plus side, is crisp and I didn't get any off or skunkniness flavors. Honestly, this was better than plenty of crappy euro lagers. Attempting to rate to style, but it is hard since I've never had a craft NA beer and only had a handful of NA beers in the last 30 years of drinking beer.

A 275ml green glass bottle with a BB of Nov 2014. Purchased a while back from a supermarket. I'd like to know why they called it blue....

A: Poured into a stemmed pilsner glass. A clear pale-gold colour with medium carbonation. Forms a large head of white foam that lasts for a minute or two before collapsing to a patchy surface layer.

S: Aroma of cooked grain with hints of husk, vague biscuits and stewed leaves. A twinge of sweetness.

T: Tastes of overcooked grain with a harsh character and a crisp bitter finish. Notes of husks, overdone veg and stewed leaves/herbs. An acrid hint of cardboard in the background, followed by a moderate bitterness upon swallowing.

M: Mouthfeel is light, tingly and dry, with prickly carbonation and a thin, watery body. Slightly astringent, accompanied by an aftertaste of mushy, overdone grain and harsh stewed leaves/herbs.

O: Blech - not particularly nice. Looks alright, however the aroma and flavour are an unpleasant blend of cooked grain and stewed leaves. The hop bitterness stands out due to the light malt character, but is rather astringent as a result. Watery body. Decidedly mediocre - if you were looking to avoid booze why would you choose this? Not recommended; give it a miss.

We pour an entirely translucent pale yellow beer. It holds a half finger tall head, composed of thin white bubbles. A single thick sheet of lacing is left around the glass as it goes relatively quickly. Carbonation appears active, and no haze or sediment is noted. The aroma opens with hearty grain. This appears as oats, whole grain bread, and corn, with a bit of a toast. There is little else to go off, but it does have that souring, puckering, adjuncty bite that is so characteristic of many of the nonalcoholic varietals. Our first impression is that the flavoring is much better than the smell. The flavoring opens with salt and toasted grain. The latter is certainly adjuncty with flour and metallics, but comparatively smooth. The flavoring remains light until the middle, where black pepper and dried grassy grain take off. These pucker the drinker, distracting from the initial adjuncty punch. The finish is with a surprisingly robust hop quality. These are in grassy form tonight, and add to the puckering, bittering bite from the center. The end is nicely balanced, with the grain not entirely pushed aside by the hops, but rather complemented by them. The aftertaste breathes of that souring aromatic quality, adjuncts, flour, faint grassy hops, and a faint molasses, for some sweetness for the first time in the tasting. The body is lighter, and the carbonation is on the higher side, as it stings your lips with each sip. Froth, cream, and slurp are all average. The mouth is left more wet than dried, and puckered from the sour qualities. The abv is nonexistent, and the beer drinks easily.

Overall, what we enjoyed most about this brew was the surprising hop quality. This really helped balance the drink, which is tough for a lot of these nonalcoholic beers. The flavoring also stayed true to Beck’s with their characteristic bitterness and metallic yeastiness. This is the best of the style we have had to date, when comparing strictly on flavor.