Hen of the Wood 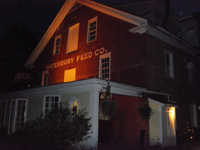 View: Place Reviews
Reviews: 6 | Ratings: 28 | Log in to view all ratings and sort

Come here for the food and atmosphere. Ohhhh the food. Very well done. Very cool atmosphere as well. On a nice day, sitting outside overlooking the river chowing down on perfectly executed food cannot be beat.

20x as many wine selections. And four well curated ciders.

Food is the star though. Including cheeses and charcuterie. And it's incredible.

The original. Has a much different atmosphere than its newer Burlington location. Very small and intimate. The food is excellent and the tap list, although only 3 or 4 deep had HF Citra and Heady (!!). Some nice bottle selections too, although pricey.

Nice upscale type of place in Waterbury (haven't been to the Burlington spot), nice draft list, amazing food and solid service. Grabbed a bottle of Cantillon Iris last time in and was very happy with everything Hen of the Wood had to offer!

I have a very mixed opinion of this place. It's a very nice place for sure, and has a very great reputation from locals, but when all is said and done, it's simply "not my kind of place." Still, I find it impossible to give it anything less than a great rating overall. I wouldn't even really classify it as a beer destination, and it's certainly more of a wine bar than a beer bar. And furthermore, more of an actual restaurant than a bar.

Hen of the Wood is in basically a refurbished mill, and it's barely recognizable as a restaurant from the outside, and with that small sign out front, it's easy to miss the place if you're not specifically looking for it. I don't even think there are any other restaurants or shops in the vicinity. Even when you walk into the foyer, it doesn't look like anything at all. But following the sign downstairs, you will discover a beautiful layout, and it basically feels like you're walking into someone's top-of-the-line wine cellar. There's no bar here, though I think you can stand (and maybe sit) at a counter near the kitchen, where all the cooking is in plain sight. The lack of a bar was really the main reason I felt uncomfortable here. Traveling alone as I was this time, it just felt weird having to get a table for one. But hey, two or more, not a problem. There's a small but sufficient dining area, and a sunken area with a table for a larger party. And even though it's in the basement so to speak, there are windows with a view of the creek, and a small outside seating area.

As for beer, selection was pretty slim, with only two taps. But the quality was there. HF Twilight of the Idols on tap? That was surprising, considering nothing but Edward was available in any other bar in the state (not that there's anything wrong with Edward). There's a decent bottle selection too, but really nothing that took me away from TotI. I wouldn't get too excited about reviews boasting Cantillon being available here. I mean, yes, they had LP Kriek, but at $49 a bottle, I wouldn't really call that "having Cantillon available." You'd have to be pretty desperate for Cantillon if you're paying that price, though it wouldn't surprise me at all if people still buy it. Now if you're a wine connoisseur--which I'm not at all--the selection here seemed pretty amazing. On the plus side, draught prices were reasonable.

Service. Well, everyone who works here was super nice, and I mean everyone. The girl who served me was a little bit distant and unattentive actually, but she was still friendly and answered my questions. I think the kitchen staff was the highlight of the service department. When I was on my way out, they were the ones who asked how my meal was, and enthusiastically bade me good evening, encouraging me to visit again. They really do seem dedicated and proud of their work.

As far as the food goes, again, it's really not my style. Don't get me wrong, the food and the preparation was tremendous in and of itself, and the chefs are not just courteous as aforementioned, but also highly professional. The food is elaborate, but on the skimpy side. There's no sort of pub grub or hearty entrees here, rather you're paying top dollar for food art. And that's fine, a lot of people like that. But for me personally, when I pay $12 for something called "duck sausage," I prefer to have more than a half ice cream scoop of mashed potatoes, a few tiny bits of ground meat hidden inside, topped with a soft-cooked egg yolk. But that's just me. Honestly, that and the other small plate I got, ornate as it was, was pretty bland. With the prices of some of the high-end plates, I really just didn't want to risk anything else. The steak and such sounded excellent, but I didn't want to pay the price only to be greeted by a two-bite morsel that nonetheless could've been the subject of a Van Gogh painting.

In the end, I would not go to this place again by myself. It's a great place to take the wife or a date, or even to have a nice night out with some friends in a pristine dining environment. (Bring your big wallet.) But for all us crazies that are in VT to hit up all the beer spots, fill our cars with HF and HT and Lawson's, and drink fresh local stuff at the bar, I'd recommend skipping over this place and going to the main trifecta of beer bars on the main Waterbury stretch.

This place is nothing short of amazing. I want to dive in and give a long review, but it will not do the place justice...

The atmosphere is incredible. Located in an old mill, situated upon a waterfall, with a large open kitchen and exposed beams - - This place is unbelievable. Arguably the top restaurant in the state and Northeast, this place comes off as very casual and unpretentious. A very homely and comfortable feel, it seems everyone is there having a great time.

The staff is incredibly knowledgeable, friendly, and of the most uppermost in professionalism.

Beer? Topper and Hill on draft. What more do you need? Oh, you want Cantillon? Sure, you can have that too.

Food. I lack the vocabulary to properly describe the food. It is unreal. A constantly changing menu focused on local and fresh ingredients, prepared by some of the most talented people in the state.

ANYONE who has the time, you must swing by and eat/drink here. The price point for the service and quality is absolutely perfect.

One of the best restaurant experiences (if not the best) I have ever had. The entire staff was extremely friendly & knowledgeable about their menu. The food was incredible. We had appetizers, cheese plates (the cheese was absolutely wonderful), drinks (I had Hill Farmstead Walden and The Alchemist's Heady Topper on tap) as well as entrees and desserts. I had the Hanger Steak, which blew my expectations away - almost suspiciously delicious (in a good way). Highly recommended. Parking lot had ample spaces and we ate at 7:00 pm on a Saturday (I made reservations a month in advance though, just in case). A hidden gem. Prices weren't ridiculous but it's not cheap either. Worth it completely. There were a couple tables outside (we ate inside) that are on a porch right next to a beautiful waterfall and stream.

Beer-wise: They only had 2 taps but they were Hill Farmstead and Heady Topper. Plus, they had some high quality bottles including beer from Cantillon, Founders, Allagash and other great breweries.