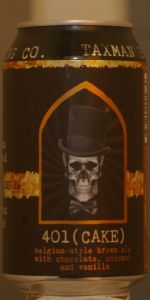 4.3/5  rDev +9.1%
look: 4.75 | smell: 4.75 | taste: 4 | feel: 4.25 | overall: 4.25
Looks like a stout, jet black khaki head. Smells like German chocolate cake (or Dutch, is there a difference?). Right on the money though in a blind smell test this could definitely pass as cake. Tastes like advertised except it has the alcohol kick known to the style. Feels heavier with a full mouthfeel without being too viscous. Overall a well crafted beer that on one hand would be excellent as a stout that hides its abv, but on the other hand dessert stouts are pretty played out at this point. Props for the originality and smell here.
Feb 09, 2022
Rated: 3.84 by icemanexit from Indiana

Smell - The nose had the presence of roasty dark coconut. It was not as sweet as I anticipated.

Taste - My first impression was to think that this was a very dry brown. It was not overly sweet like many coconut infused beers. The coconut came more toward the back, but was not sweet. The dry profile continued.

Mouthfeel - The beer had some viscosity, allowing it to cling. It was not a typical brown.

Overall - I often feel that Taxman does not go far enough with their beers. This was the case with this offering.

S: Roasted malt, chocolate, brown sugar, vanilla. Didn't sense too much coconut in there. Sweet smell for sure, but more like cola

Overall: This is an OK beer. As far as the dessert aspect goes, this doesn't really do it for me. As a brown ale, it is a better experience. This is an average but enjoyable brown ale.

3.73/5  rDev -5.3%
look: 4 | smell: 3.5 | taste: 3.75 | feel: 4 | overall: 3.75
Attractive midnight brown with solid tan rim around the edge of the glass and minimal lacing. Automatic isn’t especially inviting. Taste is less than the sum of the parts. Cocoa nibs, coconut, and vanilla become muddled together instead of complimenting each other. Overall solid and worth trying, but not worth seeking out.
Jan 24, 2020
Rated: 3.75 by brittanylicious from Indiana

4.11/5  rDev +4.3%
look: 3.75 | smell: 4 | taste: 4.25 | feel: 4.25 | overall: 4
Slipping in Some More Happy New Easter IndiCANa Beer Sunday (Week 739) Since I CAN! I am now playing "Beat the Clock" but I have a couple of last CANs that I want to get in before the thread closes for the week. I had originally received this one from @jkblr but it became a shipping casualty & I wrote it off. See what I did there? While at a monthly bottle share, the person who brought this one bequeathed it to me, knowing of my affinity for Taxman BC without any knowledge of the original's untimely demise. How cool is The CANQuest (tm)?

I like that they are declaring it a "dessert ale" from the jump. It gives the CANsumer a heads up as to what is CANming, rather than being a total surprise following the Crack! & Glug! Speaking of which, the former revealed yet another brimful craft CAN while the latter gave me a pseudo-cascade. It bubbled, fizzed and generally degassed to form just over two fingers of fizzy, foamy, soapy, light-tan head with marginal retention, quickly falling away to wisps. Color was … Brown? Not hardly! It was Black/Opaque (SRM = 44), allowing ZERO light penetration. Nose made it clear that it was going to be a dessert beer! I got the coconut & vanilla VERY strongly, followed by chocolate & caramel, all overlain by a coffee-like roastiness. This smelled like dessert & coffee in one place. Mmm. Mouthfeel was solid, a thick dollop scooped into my mouth & onto my tongue. The taste was less sweet than the nose had led me to expect, but it was still quite dessert-like. I got an initial wash of caramel & chocolate, receding to allow the coconut & vanilla to come forward, all in a sweet mélange. Finish was semi-sweet to semi-dry with the roasty coffee-like flavors lingering well past the swallow. I would not want a steady diet of this, but I do not think that such is what the brewers intended. This could easily be shared with two or three people over dessert. YMMV.

3.74/5  rDev -5.1%
look: 3.5 | smell: 3.75 | taste: 3.75 | feel: 3.75 | overall: 3.75
12oz canned 12/4/18 (1 month ago) poured into a snifter at fridge temp 8% ABV 26 IBU per label. The beer pours dense medium to dark brown with quickly fading light brown head. The head recedes to a few bubbles and leaves no lacing. The aroma is dark baker's chocolate and vanilla. The flavor is more dark chocolate with the roasty malts, Belgian yeast, coconut and vanilla coming out in the aftertaste. The mouthfeel is medium to full bodied, adequately carbonated and semi dry in the finish. There is enough bitterness to keep this one balanced. There is something in the taste that mimics strong alcohol, but I think it's the combination of Belgian yeast and vanilla. Overall, good. Interesting take on the desert style ale with limited sweetness, but limited input from some of the ingredients.
Jan 06, 2019
Rated: 3.68 by TargaFlorio from Indiana