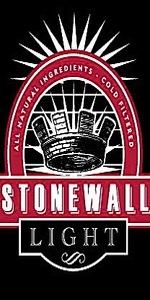 Notes: Stonewall Light is just that. The same high quality light lager in a 9.5 oz bottle. Perfect for having friends over, they're sure to be a conversation piece. Their smaller size and unique shape have made them a big hit with both the female and male drinkers.
View: Beers | Place Reviews
Reviews: 13 | Ratings: 34 | Log in to view all ratings and sort

Beer is light bodied with a wet finish - kind of surprising for a light beer.

Overall, for a light beer, pretty decent. I give it a A-.

A- Opens well and pours a good high white head that is gone in 30sec. Light gold and clear

S- Oodles of hops and smells like a European beer

This one pairs well with.... Chicken wings with a nice sweet and sour sauce.

Appearance - Aggressive pour yielded about a finger and a half of head, which disappeared within a couple of minutes. Beer is clear and a fairly rich golden color for a light lager.

Smell - Lots of grain and nothing but the grain. One dimensional, but at least it was a fairly strong aroma.

Taste - Extremely grainy and while more flavorful than other light lagers, it almost tastes like if corn flakes were made into a beer this is what it would taste like. Still deserves props for tasting like something albeit the graininess is done in a heavy handed fashion.

Overall - As far as light lagers go this is a winner, although if you object strongly to corn flakes, I suspect that you won't enjoy. While the bottle was small, it was only $1.25 CDN. You could do a lot worse than this.

Very good for a light lager. Pours clear gold coloured with minimal head. Smell is cereals and grains. Taste is the same. Subdued bitterness, slight hops noted. Mouthfeel is a bit flat, but overall, It is what it is. A very reasonable light lager. Better than any macro I’ve tasted
July 17 2020

275 mL single bottle from the LCBO; no freshness info given. Looked like a decent deal/cheap tick at $1.75 (even if it is light beer), but I didn't notice the absurdly small serving size until later.

Pours a clear, pale straw-yellow colour, topped with slightly more than one finger of frothy, soapy white head. It wilts away over the next few minutes - which I guess makes this one of the best-retained light lager heads I've ever seen. It even manages to coat the glass with some scattered gobs of lacing. The aroma is (unsurprisingly) a bit skunky, with the usual pale lager suspects rounding it out - grainy malts and weedy, grassy hops. Reminds me more of an EPL than a light beer so far.

The flavour is, of course, not all that interesting - but by light lager standards there are certainly a few worthwhile traits. The taste is mostly of cereal grains and pale malts, with some weak lemon citrus sourness to support it. Finishes with some floral hop bite and watered-down citrus flavour. Light-bodied and watery, with appropriate carbonation for the style (i.e. quite fizzy). Drinks like fizzy water - I only needed a few sips to complete this review, and the remainder of the liquid went down in a matter of seconds.

Final Grade: 3.24, a C+. Stonewall Light is actually a pretty decent beer for what it is, and I'm struggling to think of other light beers I'd prefer in its place. Obviously this is an inherently bland, uninteresting style that I rarely select voluntarily - but plenty of people buy light beer for one reason or another, and if you fall under that umbrella this stuff is probably worth giving a chance. You could certainly do much worse.

But seriously - why does this bottle need to be so tiny? This brewery's Buzz Beer comes in regular-sized bottles (and they aren't clear glass, either) so it's obvious that they have access to whatever equipment is needed to handle standard brown longnecks. Why would I want only 275 mL of LIGHT beer? It's like being handed a thimble full of rye whisky. "Thanks - I guess?" It's honestly baffling to me. Why even bother with such a tiny sample? I feel like their intended export market must be Lilleput and Blefuscu, because I'm not sure where else anyone would be satisfied with one (or three) of these tiny things.

Bright golden colour with white head and decent carbonation. Mouthfeel pleasant. Aroma is "all lager" - spent grain and grassiness. Flavours are also not as complex as I'd choose. The malted barley is evident, but everything else is distant (including the "lime kick").

I'm not a fan of light beers, or lagers in general, so can't pretend this review is as unbiased as I'd like. However, I have friends who like light lagers and I would happily serve this to them (until the allure of APA's reaches everyone!)

Bottle: Poured a super light yellow color lager with a small bubbly head with minimal retention and not much lacing. Aroma of light citrus notes with grainy cereal is not the most interesting. Taste is also a boring mix between some light citrus notes with some light malt notes which may includes some adjunct. Body is thin and watery with OK carbonation. Not something I will seek out again.

Appearance: Cloudly yellow with notes of green in the body that has little in the way of carbonation. No lacing to be found here, despite a finger of head and decent retention. The hazy appearance is making me raise an eyebrow.

Smell: I'm being a bit generous because it's a light beer. A bit of wet grass with some strawy malt and a hint of lemon and lime. Much like the appearance, it seems...off.

Taste: This one starts tasting like a beer, straw malt with a hint of citrus zest that turns into a mixture of floral and herbal hops and a clear artificial lemon/lime flavour. It's like a cross between a light beer and a mike's hard lemonaid, which isn't as offensive tasting as it sounds.

Mouthfeel: Well, the artificial flavour seems to cleanse the pallet leaving only the barest and nice citrus aftertaste. The carbonation is decent, but the experience comes off as a bit too alien. As I said in the taste section, the beer comes off as almost a beer/cooler hybrid.

Drinkability: This is probably the best aspect of this beer as it seems great for a hot day. Light and easy to drink, despite the peculair taste, which is also which stops it at it's current rating in this place.

Final Thoughts: I don't know if this beer is attempting to cash in on the lime craze, but my gut says no as the citrus doesn't seem out of place like many bud light lime imitators. It's weird, but still seems to mesh far better then one would expect. I probably wouldn't have it again, but I suppose it was worth a shot.

Small format (275ml) clear bottle. Clear straw, brittle white head etc. Nose has a touch of grass, light citrus/lime. Lime flavour is very light - if it didn't say so on the bottle, I may have called it a generic citrus. Very crisp and clean, with a decent amount of beeriness for a light beer - there's the impression of husk and a medium-bitter finish. Overall, not a bad light beer. Probably really low cal and such...

Light pretty much sums its up. Inoffensive, but utterly bland. Probably quite suitable for sitting on the beach with as you bake your brains out.

Pretty sure that what ever they made this out of was just waved over the vat. Some grassy hops and just a whiff of lime in the nose. Tastes and feels about as close to water as you can get and still call it beer.

Dull, but probably perfect for pounding away on a hot summer day.

revisited May 2013 - Ugh! Jeez. Like doughy liquid dust to taste. Literally a shock to swallow. Drainpour.

Puts an extremely pale lager in the glass...no head to speak of but some lacing on the glass. Spritzy artificial carbonation.

Little nip bottle provided by Mike Duggan at the brewpub.

Taste is similar, nice toastiness and a touch of malt sweetness, some floral and a touch of herbal hopping, light bitterness and pretty clean in the finish.

Mouthfeel is very light bodied, with fizzy carbonation. For a light beer, this is better than most in the style. Not too bad. Thanks Mike!

Pours an extremely light yellow with a small fizzy white cap. Some retention and a few spots of lace. Kinda par for the style, if not a touch better than expected. Neutral aroma of mild sweet grains and lemon. Taste is light... some seltzer, lemon, light biscuit and pale malt. Extremely mild hop bite. Light beer all round, but not offensive. Mike's Asian Lager hands its ass to it on a plate. Body is crap, Light and fizzy, but expected for the style.

A good example of a style I think should be made illegal.