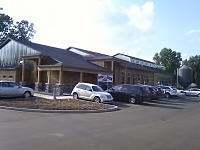 Stopped in at 3 pm on a Friday as I was driving across the state on a business trip. It was much more busy than I expected. The space is amazing with a big u shaped bar an lots of tables. 21 of their beers on tap, with lots of variety. My pint of wet hopped Citra harvest was $4 on HH pricing, which is very fair. I would have loved to put in a long session, but still had a long drive ahead. I will be sure to come by again when I'm in the area.

Typically a good selection of a wide variety of beers, including cask conditioned on occasion. The food is top-notch; the prime rib sandwich is not to be missed. Service has always been friendly and prompt.

Latitude 42 has been open for a year or so now competing in the crowded southwest Michigan beer scene. They make a wide variety of beers that tend to range all over the place. They typically have more than 20 different beers on tap, so if you like variety this is the place. Some of their beers I find to be pretty average, but they also make some excellent brews as well (the Black IPA comes to mind). The food is very good, in fact for microbreweries in the Kalamazoo area, as an eatery I would say this place ranks right up near the top. It is a very family friendly place and it is not unusual to see a lot of kids. Overall I like the place.

Awesome food to go along with awesome beer. Biggest problem is the wait. Get here before 5:30 and after 7:30 if you don't want a long wait. Was there for the 2nd time tonight. Got there at about 6:15 and had a 50 minute wait. Not enough televisions for the amount of seating in my opinion.

Second stop on our tour was Latitude 42, a newer brewery in Portage, MI. This is in a large building with a huge bar and several seating areas. I can tell this place was built with the intention of having room to grow and is able to fit large crowds of thirsty beer drinkers. We were lucky enough to get a tour by brewer Scott Freitas, previously of Maui Brewing. A bearded and friendly chap, he was kind enough to share brewing with coconut secrets with me! A bit of Hawaii entered into the brewhouse with some tribal designs on the stainless and a stuffed bust of a hammerhead shark on the wall. We had just enough time to order a beer sampler, but even by splitting a sampler each, my wife and I were not able to try all the beers they had to offer! All of the beers were solid and nearly everything was dry and easy to drink, even the 9.7% Double Chin. My favorite of their beers was the Island Fever coconut stout--light, smooth, with subtle coconut flavors. The Mango Mama was not mango-y at all and not nearly as good as Town Hall's mango IPA of the same name. We didn't have a lot of time here, but I enjoyed what time we had.

Stopped in for lunch with relatives. It's a bit out of the way (south of the airport). Building is big and airy, almost warehouse like, but is divided nicely with the bar. Giant natural wood slabs are used for above the doors and as part of some of the tables. Visible brewing equipment. Kind of like a sports bar meets a brewpub meets a new industrial space. Family friendly.

Good selection of beer. Well over a dozen, although not all listed were available and most didn't have any type of description other than style. Got a taster with 6 brews. All were decent.

Food was pretty good. Better than average. Service was fine.

Nice addition to the Kzoo beer scene; this is the family friendly alternative to the downtown joints.

Very impressive building to drive up to in the dark. It's well lit, the brew house is visible from the outside, shining brightly through some big windows. Quite impressive.

The tap room is a big open room, that is fairly loud, with a circular bar that is huge, probably seats about 25-30 people, with a bunch of taps in the middle. I'm going to say they had about 15 beers on tap. We had a good sampling of them, and they had some really nice things going on. The Citra Harvest Ale lacked a little bit of the citrus punch, but was well crafted, clean, and ultimately tasty. They had some sort of Coconut Brown or something on tap, that was very good as well.

We didn't try any of the food as we had just eaten. It's quite the impressive space, and quite large. I can see them filling up, but it's a big space to do so. Very much a restaurant vibe, rather than a beer bar or brewpub vibe. I think they will do good things. They have everything in place, not just need time to work out the kinks, streamline and go. I wish them the best.

First brewery in the City of Portage opened with much fan fare. The open dinning area is loud during peak drinking times as the beer is gaining popularity. I sampled the Citra harvest, IP EH, Headhead Pale Ale and they were all solid. Full bodied beers with great flavor without no home brewed flat taste. I consider this a higher end destination with a well run management team and higher quality food than your average brewpub. I recommend taking visitors to Latitude when they arrive from out of town.

Brand new brewery in Kalamazoo Michigan, well portage technically. Interior is nice and new, modern, but has a nice wood and stainless steel finish that lets you know you're at a brewpub. Beer selection is solid, over 20 beers from the brewer so pretty impressive for a startup, dude must have done well in his previous beer life.

The IPA I had is solid and the food is spectacular. Beers are reasonably priced around $5-7 and food is under $11-12 for most plates. If you're in the area and want to check out something other than Bells, hit this place up, it won't disappoint.

Growlers are $12 if you got glass.

Finally was able to get into Latitude 42 after two non successful visits due to long waits. The time waiting to get in was well worth it, they had no less than 10 of their own beers on tap and a fairly extensive menu. The food was excellent if you compare it to typical pubfare, they have your standard burgers, salads, small plates and pizzas.

They fill growlers and half growlers to go of everything that was on tap when I was there, and decent prices all around, dinner and drinks was very compatible to other restaurants around town. They have a lot of staff running to place, so getting a drink and food orders in was quick and easy. I would recommend going again and I know I will when the hype comes down a little so I can enjoy more of what they have to offer.

This brewery opened only 3 weeks ago, and already they seem to be well-experienced in everything that they do. The building is new and quite large for the pub area, but I forgot to peek at the brewing room. (Our server told us that they are already distributing in kegs and soon will have cans available, so they apparently have plenty of room for all of that equipment.) The interior is well arranged with the bar situated in a rectangular layout in the center of the pub, and it is surrounded by the dining tables. There is a children's play area in a far corner, plus we could see an outdoor patio at the rear of the building.

I was with a group of 4 for this visit, and we wanted to order sampler flights so that we could experience as many beers as possible, but they do not yet have their sampler glass holders and we had to choose our beers and order by the glass. (The server did bring us as many 1oz. tasters as what we wanted before choosing our beer.) There were 15 beers on tap including one on nitro and one on cask (wonderful for a newly-opened brewery) so we ended up with 4 different beers plus a few tasters. (There are also 7 Michigan wines offered.) We all agreed that the beers ranged from a grade of B to an A-, so I'll rate the beers overall at a B+ which says the brewer took the time (or is very experienced) to dial in the correct taste for each style on this new equipment.

The food menu has a normal amount of offerings in comparison to any good restaurant, so there is something there for every taste. Everyone really liked the food that they ordered, and it was served in a timely manner.

This brewery is very worthy of many return trips for the beer as well as the food.