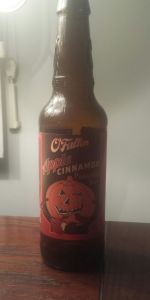 Notes: Imagine the perfect blend of Pumpkin and Apple Pie! We use natural spices to achieve the pumpkin-apple character in this beer. “Applesauce” is the target color for this amber ale. Bitterness is non-existent as we want the malt and spice to drive the flavor.
View: Beers | Place Reviews
Reviews: 6 | Ratings: 16 | Log in to view all ratings and sort
Reviews by FBarber:

Pours hazel brown clear and crisp. Smells like a green jolly rancher. Almost no cinnamon on the nose. Taste is watery with that green jolly rancher flavor tinged with a ton of cinnamon. It's like having a cinnamon mint and green jolly rancher in your mouth at the same time. Oh, and unless you read the label, you'd forget there was supposed to be pumpkin in this. Very thin and almost watery. Decently carbonated. Overall this is pretty meh. To my taste buds its a beer I'd never touch again.

From a 12 ounce bottle, this brew is goldenrod in color with a super-thin head. The foam quickly fades to nothing. The aroma reminds me of an apple-cider tea drink. It seems like it should be served warm. I get a lot of both apple and cinnamon, but they seem a little artificial and misplaced. The taste is balanced, if not just a little on the sweet side. The apple and cinnamon are a little more rounded in the taste than they are in the aroma. Medium-full in body with a lingering baked-apple character. Interesting, for sure, and nice for the season, but not really my style of beer.

Brown in color with a lot of fine sediment suspended within. There's a partial fingernail of foam around half of the head and about a quarter of the middle and it is off white. It smells like a cheap scratch 'n sniff apple sticker like I had smelled back in my distant childhood. The taste is like a very artificial apple candle from the dollar store. The mouth is very carbonated and overly spiced. O'Fallon makes some good beers, but some of these pumpkin variants were horrid this year.

Picked this up along with all the variations at Carnivores in Oakmont.
Pours a nice brown orange much darker than the vanilla and again just a 1/4 inch of foam that settles to nothing quickly. Smells most excellent like a hot cider baked apple with rounded cinnamon and a brown sugar glaze. Taste kind of falls flat as all cider flavor is lost beneath the bitter pumpkin ale body and very little sweetness recovers it. Cinnamon is there but again little to no sweetness. Body is kind of flat the carbonation seems to put off this beer. Overall both this and the latte one have little carbonation and have both been kind of terrible. Hopefully the peach one is better.

Poured into a nonic pint glass.

Look: Looks like a cider with a dark yet clear copper body under a thick cream colored head that doesn't recede much. Lacing is thick yet spread out foamy bands.

Aroma: Apple and cinnamon fully represented, but also a little thin and metallic.

Taste: Tastes very spicy with a ton of cinnamon-spiced apples up front, then tapers off into a cidery metallic watery mess.

Overall: Not a fan. Too thin and watery, but the cinnamon apple is definitely there. Virtually no pumpkin flavor whatsoever.