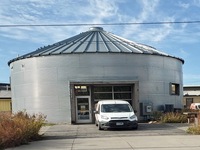 i absolutely loved this place. for one, its rad that its all organic, its really hard to do that, and these guys are doing it as well as anyone out there, huge props for that. the space is awesome too, built in a silo, with gorgeous outdoor area with picnic tables along a garden walkway outside, but a cozy little bar in the silo too. they have a few core house beers and a lot of them have amendments available too. they have a great dark ale called nice, and did an in house coffee infusion. they also did a different beer with fresh tomato juice from a local farmer, clever stuff, and all the beer was awesome. the couple in charge of the place are really kind, super busy on a friday night when i was there so we didnt get a lot of personalized attention, but they kept are glasses full and were eager to chat about their concept when they had a moment. not a ton of capacity here and no plans to grow from what i gather, i think its a neat sustainable operation, with built in business sharing a parking lot with the larger urban growler brewery right there. i really loved the vibe here, both inside and out, so mellow and just all about the beer. the beer was great too, simple but jazzed up in a classy and appropriate way, and being organic is hard work in this industry, so super cool for that reason too. loved it here, highly recommended!

Bang is a unique brewery for sure. It seems more like a hobby brewery than anything else. They are only open two days a week for a total of twelve hours. Thus, it took me three years to get around to checking them out. Located in a grain silo that they had built for the brewery, the atmosphere seems more country than other breweries in the Twin Cities. It would have been a nice atmosphere if not for the blaring music. My group had to go outside to hear each other speak, and our beers quickly became skunked on their shadeless patio. The beer was good though before it was skunked. Of the four beers we had between us all were made well, and I will happily drink any of them again. The selection was adequate, and leaned toward the lighter end of the ABV spectrum. The only thing I would like to see is maybe one higher ABV beer, but that is a bit nitpicky. Overall, I had a nice enough time at Bang that I would go back with the hopes that the music will be turned down a little.

A small, cylindrical "grain bin" brewery completely clad in corrugated steel, located in an industrial park. There is a small parking lot it shares with other businesses, but the entrance is off of a road with (free) street parking only. The high, single-room interior has a conical ceiling, with only the cooler and restroom nested in their own structure. Stainless steel brew equipment, a bartop on wheels, and some reclaimed wood decor make for an intimate yet pragmatic space. There is a paver patio out front with a couple large tables. There is not signage for this place, FYI, but that speaks to the owners' approach (simplified, low-key concept).

Smooth jazz and the aroma of mild roasted grains float through the air upon entering this small space. The brewer and his wife/co-owner were pouring their all-organic suds on a weekend night, and both more than willing to chat about their setup and the goods. With that said, of course the service is fast, friendly and knowledgable.

Seven taps, all options for growler fills, across standard styles (a dark ale, handful of bitters, a strong ale, a pale and an IPA). The few we had were delicious, clean and to style, with that tell-tale "organic" grit.

A lovely change of pace for a taproom concept, this quiet and welcoming brewery is certainly worth a stop!

This is like a small circular silo in a light industrial area. Its small but on a nice day you can order a beer and sit outside and enjoy the clouds. The beer is decent and the people friendly.

A friend of mine is doing a tour playing shows at various tap rooms in Minnesota and Wisconsin, and one of his stops was Bang! I stopped in on a Thursday afternoon to catch his show, and was a little bit surprised to discover the brewery was located in a literal grain silo in the middle of a very industrial area.. Shiny new-looking brewing equipment adorned most of the walls with a few taps and a stainless bar on wheels along one side. It was quirky, but in a very interesting way that actually seemed to work. Space was a bit limited (being that it is, after all, a grain silo) but the beautiful July afternoon allowed most of the customers to congregate outside along picnic tables and portable chairs.

The owners were there personally pouring their beer and more than willing to BS about their beer, their brewery, beer in general, and whatever other random topics came to mind. They were extremely knowledgeable and personable.

Being a taproom, and a very small one at that, their selection was fairly limited. Four house beers were available (a "dark ale," an APA, a mild, and a "real ale" which resembled a bitter) on what appeared to be a 5-tap system. The pale was very solid with a healthy dose bittering hops but the malt and hop flavors and aroma to stand up to it. I followed up with a pint of their bitter, which uses German hops to provide an interesting twist (a friend told me it was a SMaSH beer, but I didn't confirm this with the brewer). We were given a small sample of their "dark" ale, which fit somewhere along the porter and stout line and was a very solid, even if not their best brew. I skipped the mild as I'm generally only a fan of the style on cask.

It should be noted that all of the ingredients are entirely organic, probably a factor in the relatively high (for a taproom at least) price of $6 a pint. They also sell growlers, though I didn't check the prices for those.

Since Bang! is a taproom in Minnesota, there is no food served and they don't have food trucks there, for now anyway.

Overall, this is a small, quirky, and fairly out-of-the-way place. However, they are very friendly people who make excellent beer and everything about this brewery is very unpretentious. I enjoyed it and since it's only about a ten minute drive from home for me, I will definitely be back.

Stopped by on a whim, by suggestion of the head brewer up at Northgate. I distinctly remember pulling in and thinking I'd gone to the wrong address. However, something compelled me to walk over to the, slightly out of place, Silo on the edge of the lot. The inside was very impressive, the high ceiling of the silo mixed with the reconstituted wood over the tap, made for an interesting atmospheric feel. We caught them pretty early in their run, maybe only a week or so after opening, but the Pale they were serving was top-notch as far as Pales go. Definitely a high IBU brew (I would've mistaken it for a IPA, had I not been told). Talked to the owner and his wife for a good bit, lovely people. Turns out they're tilling a bit of the land next to the silo to start growing a few beer supplies. I can't recall if they were planning on using them for their own brews or selling. From what I saw, I think this is a brewery to keep your eye on. Fantastic Flag ship brew, and more on the way. I'll definitely be back.