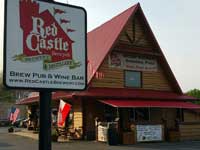 Tasting the beers at this brewery prompted me to write my first review. I've been content sitting on the sidelines, and letting others do the leg work. Here goes. The food is good. Had the kelbassa sandwich and perogies, but that's not why we're here. The beers seem to be an afterthought for whoever is in charge. The wife and I, being the self described beer snobs that we are, tried a flight of all 8 offerings. Current beers included a polish pilsner, America lager, cream ale, red ale, American pale ale, an ipa, and the same ipa on nitro. I've only ever had a couple of tastings that were utterly forgettable. This was one. I've brewed a few batches of my own, and unfortunately can taste when something isn't quite right. I settled on the pilsner because it was the least offensive of the bunch. Multiple beers had the unmistakable taste of bubble gum. We know what that means. The ipa tasted like the grains were smoked, until I tasted it on nitro and it tasted like coconut. Clearly something isn't right. If you're hungry give it a try, but stick to water. For beers, you're better off going to a beer bar where the offerings of PA beers are better.

Was visiting the local drive-in theatre this weekend and saw this brewery was less than 10 minutes away so figured we had to stop.

The place is tiny, about the total space of a 2 car garage. Bar seating for about a dozen and a couple tables for say 20 or so more patrons. The place is very clean and appears to be new.

The beer selection was pretty mediocre with all offerings akin to macro swill substitutions. At the time of this visit there were 9 things on tap: an english pale ale that was available via typical draft and also nitro, 2 different fruited shandys, a cream ale, light lager, lager, pilsner and ipa.

My buddy and I each got a flight of 4 beers so that we could sample all but 1 of their offerings. Every beer looked identical with the exception of how hazy or clear it was. Kinda comical that all 8 brews were very pale yellow and seemingly indifferent from the rest.

The beer was pretty sad. For as much as the brews looked the same, they all smelled and tasted the same too. Our waitress mislabeled/poured the wrong beers because I was clearly served some shandy instead of the pils and my buddy did not get the nitro brew despite ordering it.

The food came highly recommended so I opted for the cheese steak special. It was served with a mountain of fries. At least the fries were decent... the cheese steak meat was absolutely murdered, like it was cooked previously and reheated then they tried to salvage it by adding BBQ sauce to it.

$11 for a poor cheese steak and fries, $6 for 4 samples of macro-like mediocre beer. I dont need to visit this place again and would not recommend it.

Food was very good...Polish style. Perogies were awesome. Cool little spot with nice waitress and laid back feel, a couple big TV's with football on, and great prices.

Overall a fun little spot. Not mind blowing beerwise but if you're in the area worth a stop in for a quick flight and some perogies.

Red Castle Brewery is a local stop for me. The food is just as remarkable as the beer. My favorite brews of Red Castle include King's Mistress, Dark Dungeon, and the Rebellion Stout.