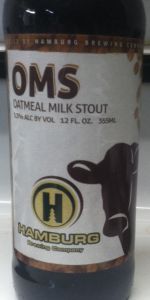 Moderate head production; good retention and very nice lacing. Body is a bit lighter in color, somewhere between a dark brown ale and a porter or milk stout.

Disappointing. I love a good oatmeal stout. This is not a good one. Smells and looks great but that's where it ends. A large lack of character. It's hard to distinguish much of anything here.

Smell is quite pleasant with light lactose, soft bread and hints of chocolate malts.

Taste follows the aroma with lactose, hints of oatmeal and toast, then light chocolate, roast is limited. Sweetness is not overdone and the oats add some depth.

Mouthfeel is moderately carbonated with lingering light sweetness from the oat and lactose.

Overall a solid hybrid style is easy drinking but a bit limited in roast stout flavor.

Should I be concerned OMS ("oatmeal milk stout") is only about as dark and opaque as its bottle? I'm of the belief that anything with 'stout' in its name should be black but what's in the glass is unmistakably brown, even when viewed away from the light. And it's appreciably clear too. The lackluster head doesn't instill much confidence either...

But aroma is the true test for any kind of stout - do I smell tastefully roasted, even lightly singed grain with nuances of chocolate and a creamy, nutty, nougat-y center? Do I even smell some chicory coffee? Yes. Yes I do. And that combination of flavours is not only inviting but also seamlessly balances the bitter and the sweet.

"Oatmeal" and "Milk (or "Sweet")" Stouts are respective styles in their own rights. There's nothing that says you can't combine the two and, admittedly, it's often difficult distinguishing one from the other. Indeed, the residual vanilla-like sweetness of the lactose tastes natural when paired with the innate coffee-and-cream flavours of dark roasted grains.

Likewise, the milky element added in the mouthfeel department doesn't detract from the oily, velvety-rich oatmeal qualities but, rather, adds another dimension on top of it. Immensely drinkable, I think I'll skip the hot chocolate next time and opt for a mug of this instead (given the milk sugars you don't even need to add marshmallows).

Hamburg OMS is about as toothsome and approachable as stouts get but is none the worse for that. There's a lot to be said for being able to offer prominent roasty, bittersweet flavours at a PG-rating. This well-calibrated recipe makes for an excellent 'crossover' candidate and aught to be shared with every Guinness drinker you know.

Very Dark brown with a tan head, it looks very nice at first, but the head did not last long. I was soon looking at a cup of cold coffee. Smells very nice of coffee. Tastes a tad too sweet for me, and does not feel like an oatmeal stout, which is weird.

A: The beer is clear but very dark reddish brown in color. It poured with a short off white head that quickly died down, leaving some wispy lacing on the surface and a thin collar around the edge of the glass.
S: Light aromas of lactose are present in the nose along with hints of dark malts and coffee. The smell becomes stronger as the beer warms up.
T: The taste follows the smell and has a little bit of sweetness.
M: It feels medium-bodied and a little smooth and creamy on the palate with a moderate amount of carbonation.
O: This is an interesting hybrid between an oatmeal stout and a milk stout; the smooth and creamy mouthfeel is reminiscent of an oatmeal stout and the lactose aromas and flavors are typical of a milk stout.

This is an awesome oatmeal stout. For being 5.3% abv, it has a ton of flavor without any alcohol presence whatsoever. I had no idea how good this beer would be, but I'll be getting it again if I see it.

S: [4.00] Coffee with a little bit of chocolate brownie underneath.

T: [3.50] Creamy coffee, some mild malts in the middle. There is also a bit of hop presence in the finish.

O: [3.50] Nothing too spectacular. This is has a decent nose of coffee and hints of chocolate. The taste is ok following the nose - but with a bit of hops thrown in. The mouthfeel is most troubling. With an oatmeal stout I have a certain expectation on creaminess and smoothness and I don't think that this one delivered on that.

Served on tap at the brewery into a large tulip.

Poured nearly opaque black with a small light tan colored head. Average retention and not a whole lot of lacing.

The aroma is mainly of deep roast with hints at coffee and dark cocoa. Even further hints of lactose but mainly your getting a deep roasted aroma.

Taste is similar To the aroma, roasted malt, a bit of a oatmeal feel, some lactose like sweetness and background flavors of coffee and chocolate.

Light to medium in mouthfeel, maybe just a touch to light, fairly creamy but not as much so as most other oatmeal stouts. Good drinkability factor.

A well made beer, nothing off about it, it's just the beer geek in me craves something a bit more. Easy to session non the less.

OMS from Hamburg Brewing Company
Beer rating: 86 out of 100 with 35 ratings