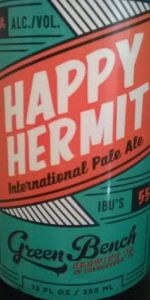 Notes: Silas Dent lived a simple and happy life on Cabbage Key in a hut made of palm fronds, surrounded by mangroves and wildlife with no running water and no electricity. In 1948 Dent was featured in LIFE magazine, who named him “The Happy Hermit of Cabbage Key.” It was said that Dent could forecast the weather, calculate the temperature, and commune with Poseidon himself. Before his death at the age of 76 in 1952, Dent claimed that “civilization is too dangerous.” Our Happy Hermit Pale Ale is a sessionable, hop forward approach to the style that is a perfect match for a breezy St. Petersburg afternoon, and like Silas, is one of a kind
View: Beers | Place Reviews
Reviews: 20 | Ratings: 86 | Log in to view all ratings and sort

Pours out with a medium haze, and supporting a sturdy and lasting khak cap.

From a can, this brew is a gold haze...with a slim head. The aroma is a pungent hop scent that seems dry. The taste is actually a little more balanced. The flavor has a bit of fleshy fruit and citrus, and the finish is hoppy. It is good, but not great.

Pours a foggy straw-orange with a finger of white foam. Aroma is biting hops, with herbal and pine with biscuit malts. It has a bitter punch. Flavor profile is pine, herbal, citrus, and slightly medicinal. Big hop notes that drive a bitter profile with a quick, dry cut. Mouth feel is a light fizziness, but otherwise feels like cold brew tea. Overall, a bitter, biting beer within a light profile.

Poured from a 12 oz. can with no discernable freshness date: bright and clear, yellow-gold with a quickly receding white-head.

The aroma exploded with fresh and abrasive, tropical fruit.

Just poured into a glass, very cold, this ale was extremely bitter-almost puckered my lips; but as the ale warmed a little the hop profile reveals fresh citrus with hints of mango and marmalade. The bittersweet hops mingles quite well with the faint malt background.

Save that first palate cleansing sip, this is quaffable session IPA with a refreshing and quenching bitterness.

Poured from a 12oz can with a packaged on date of 8/1/17; into a pub glass.
Appearance- an oily straw yellow with plenty of steady flowing bubble streams. Head is a thin, soapy white. Lacing is sporadic.
Smell - a collection of pineapple and earthy notes off the can and glass.
Taste - earthy flavors dominate here, and the pineapple notes that are identifiable in the nose, are faint, at best.
Feel - an odd grassy bitterness overpowers any attempt at balance.
Overall - with every sip I find myself trying to determine what I might be missing, but every time I come up with the same conclusion...it's just an odd beer, which after reading the description on the label, that appears to be what they were going for.

Tap a Global Brew in Rock Hill, MO. Poured a clear golden yellow color with a small, white head of foam. It smelled floral with some piney notes. Tasted slightly sweet with caramel and citrus flavors. Enough bitterness for balance.

from a 12 oz can at Union Beer Store in Miami -
Smell: nice. lemony, citrusy with light biscuity bready malts. some spicy hop notes.
Look: pours golden with minimal head and below avg retention. perfectly clear. insignificant lacing.
Taste: Nice balance of citrusy hop flavors and malt sweetness. bitterness is in sync with the malts and matches what you’d expect from an APA.
Feel: medium (but on the thin side) body. creamy texture and crisp carbonation. no real astringency to mention. Finishes very smoothly, dry, short and with just a touch of bitterness lingering through.
Overall: they went for balance and drinkability for this sessionable ale. on the light side of American pale ales but that is a plus in this case. I like this beer!

On tap at Maxi’s Lineup. Clear golden. Smells of floral hops, light resin, and a hint of doughy malt. Tastes more of resin and a pungent herbal back end. Cracker malt is very light. Mild bitterness. Crisp. Drinkable. Light and flavorful. Excellent all around.

12 oz can.
Slightly hazy golden body with a good white head. Spotty lacing.
Mildly pungent, hoppy, grassy and fruity aroma with a touch of yeast.
The flavor largely follows but is more herbal and less grassy. Near moderate bitterness.
Feel: near medium body with medium+ carbonation.

Happy to be 10th reviewer.
I really like this session pale ale. Poured from 12 oz can with funky label on alum. cylinder.

A) pours a hazy yellow with a surprisingly large and rocky head which persists leaving good lacing.

S) All white saltines on the nose, with faint hints of fruit and grassy hop.

Pour a slightly hazy yellow golden color with white head. Citrus, light pine, hay, and some floral notes on the nose; follows onto the palate. Light bodied. Finishes with some light fruit and grass.

Pours a medium yellow gold color.
Smell is moderate citrus hops and pineapple.
Taste has some grapefruit and lemon.
Hoppy but not overpowering.

poured from a can into a glass. no dating could be found.

pours a hazy medium yellow with a small which head which persists leaving good lacing.

not getting to much on the nose, faint hints of fruit.

fruit comes through much stronger on the tongue. mango and other tropical flavors. good sharp hop bite around the edge of the tongue.

feel is smooth and medium bodied.

All in all, a nice pale ale.

green bench is really kicking butt, so happy to have them in colorado now. this is one of the first hop driven beers i have had from them, and it as well done as their belgian styles and wild ales. really high on their stuff at the moment. this one on tap at parrys pizza on 120th. mostly clear, very pale, slightly orange tinted, with a full inch of white head in the globe. i smell citrus forward hops, but also a pretty neat and super fresh grain base that may include some wheat and some pils type grain as well. its round in feel, fairly full for a session beer, and hopped rather aggressively. notes of lemon and grapefruit to it, and a slight tang at the end, tart even, like some fruit is actually added in, although im fairly certain none is. clean hop flavor, less bitterness than many on the back end. its incredibly well carbonated, so despite being kind of big for a session beer, it still drinks really easily. the hop profile is distinct and the balance is there. really enjoying and appreciating the quality level these guys are on right now, hope to see more of their beers trickling into the state here. this is a good one, should do well this summer. a beer drinkers session beer.

edit: just enjoyed a sixer of cans on my florida vacation, and the beer was far better than i described it here, maybe being that much closer to the source makes a difference, but the hop profile in the finish here is just amazing. it all comes on so late, after the swallow even, notes of fresh pink grapefruit, even smarties candy (in a good way). lighter than i described above, really refreshing, and a standout in the session category both for its quality and its unique hop profile. what did they use? one of my favorite go to fridge beers of my recent trip!

Pours hazy gold with moderate retention and lacing. Tropical and dank aromatics with a light body and a crisp mouthfeel. Tropical citrus on the palate and quite dry beyond the juicy hops. Very light malt. Firm bitterness but easy to drink.

Pours a clear brassy color with soapy white head, huge mess of lace strewn down the glass. Smell: notes of passion fruit, guava, and biscuit; lemon-lime citra citrus. Nice but perhaps fading, though only ~5 weeks in the can. Taste: fresh grapefruit segment, splash of lime juice, crackery back, pop of lemon rind, soft biscuity graininess and berry stickiness in the finish. Plenty hoppy at 55 ibus vs <5%. Light body, fluffy feel.

[Guessing the user ticking this a "1" had no tastebuds left from ticking 20+ beers in one night. Someday the pDev will come down to a reasonable value.]

On draft at Fodder & Shine in Seminole Heights, FL. Pours a nice clear amber. Smell is of stereotypical citra hops. Tastes follows suit, but with a graininess, almost like a homebrew-beer. Really good though. Tastes similar to Tampa Bay Brewings Reef Donkey and Southern Brewings West Side. No points for originality, but can't deny quality. 7.3/10

On vacation & had this beer at The Ale & the Witch in downtown St. Pete's. I tried it only because it was a local beer, but it was surprisingly good; more of an IPA than I expected. Nice citrus taste, but not overwhelming; probably good for someone who is not used to IPAs.
Would have it again if given the chance.