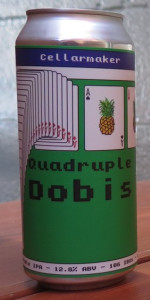 Notes: We skipped over making a Triple Dobis and went straight for the jugular. Using over 9 lbs per barrel of Citra, this single-hopped tongue basher is a ridiculously potent and obscene showcase of Citra that only a brewery like us would dare to brew. We dry-hopped Quadruple Dobis three times in the fermenter with pellets and then a fourth time in the brite tank with whole leaf Citra cones. The resulting brew is not for the faint of heart.

Thanks to David for this one.
Light fizzy head, little lacing, slear orange color

The name "citra" seems kind of misleading in its purportedly pure and super-saturated form if Cellarmaker is to be believed. Whereas most people seem to attribute the hop with more ascorbic fruits associated with the letters "c," "i," "t," and "r," this unabashed, ruthlessly unapologetic use of the popular yet still egregiously expensive hop seems to yield flavors and notes more in line with pineapple, lychee jelly, and dank grass.

I just realized I pretty much included my entire review in that last sentence (Issue Statement). This is what too much IRAC does to your brain.

Sticky sweet canned pineapple, orange zest, lychee jelly, and light caramel explode out of the can like fireworks exploding after falling out of a brief case of an unsuspecting passenger pushed into a rushing train by a train conductor. The intense pineapple shockwave, accompanied by the 12.8% ABU heat spreads fast into the proximate vicinity and lingers long enough to knock over and unleash a massive flavor scale onto your nose; be careful not to peek your nose too deep into the glass as you pour the beer out or else it may just be the but-for cause of some serious nose hair burn.

Labored Palsgraf metaphors aside, the sensation on the palate tells a similar story, and that story pretty much is that Cellarmaker envisioned creating a beautiful abomination of a beer that would take Citra hops to the limits of its zone of danger; it's like they clocked in an unprecedented amount of hops they wanted to hop the beer with first and then adjusted everything accordingly afterwards.

This is particularly evident with the amount of heat and the carapils (or many of its varieties) sweetness that accompanies every hop-derived note and flavor with each sip. Add the prefix "sweet" before all these descriptors I'm about to throw out and it paints a more accurate picture of how this beer tastes: pineapple jam, marmalade, mangosteen, fresh cut grass, milky caramel.

Despite the intermittent bouts of sweetness, the end result errs on the side of dry, although the booze burn remains mostly unquelled throughout the drinking experience. Medium-bodied, with minimally intrusive carbonation; I wouldn't go so far as to call this creamy, but it does form a thick foamy sensation around your tongue if you let it sit for a bit. Just don't let it sit too long else you may start feeling a burn.
⠀
Pineapple burps and some fire in my throat and belly. That pretty much sums up the beer and my thanksgiving quite aptly.

I'm not really sure where to place this beer among the great strong IPAs, having only had one other "quadruple" by Knee Deep. Both the Hop De-ranged and this one were just too big.

The beer itself is beautiful. It smells and taste wonderful, of sweet, zesty oranges with that classic yeast character from Cellarmaker. The alcohol just becomes so strong on the way down that it deters from all the wonderful flavors.

Still an awesome beer, especially for being close to 13% abv. Probably would have shone a little more were it Triple Dobis (yet to be made) and around 11%.

A: Amber to orange. minimal head.

T: So much like Pliny the Younger. Malt sweet fruity forward and bitter boozy bite at the end.

F: creamy and boozy, smooth but still a hard bite.

O: this is insanely good, very comparable to the younger, would love to do these side by side .

Pours a murky unfiltered bright orange with only a thing ring of white head that receded from a half finger. Nose is all citra, waves of grapefruit, pineapple, and orange. Taste is incredible. So much pineapple and orange sweetness and grapefruit bitterness just overwhelm the palate. NO perceptible alcohol at all. Smooth and not overly sweet. Like swishing citra hops around in your mouth.

Cloudy but not fully opaque orange, a couple SRM darker than Double Dobis. The nose is straight juice, peachy and pineappley with a touch of alcohol that you'd expect from such a huge beer. It's aggressively hoppy on the palate, but retains the soft mouthfeel and stonefruit-forward hop character of regular old Dobis. There's plenty of doughy malt character here, but not much actual sweetness. Crisp-ish, dry, and slightly sharp in the finish from the hefty ABV. If you like Citra hops and alcohol as much as I do, you'll enjoy this beer.