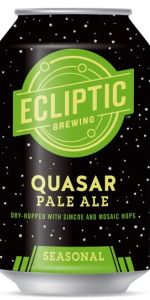 Notes: Inspired by it's luminous namesake, Quarsar is our light Pale Ale brewed for summer. Simcoe and Mosaic hops give Quasar Pale Ale a huge, fresh tropical aroma. Flavorful and easy drinking, Quasar is a stellar beer for enjoying out under the sun.
View: More Beers | Place Reviews
Recent ratings and reviews. | Log in to view more ratings + sorting options.

Look: Opaque light orange with a dense white head that pillows up top, leaving good lacing already
Aroma: Orange, grapefruit, passionfruit, blueberries, pine, strawberries, a little dank, and some malt sweetness
Taste: Pine, grapefruit rind, orange, and blueberries out of the gate with some dank and tropical fruit notes following. Malt shows up to slow the hop party some before a good IPA-like bite sets in and leads to a dry finish
Mouthfeel: Full, medium-high carbonation, and definitely dry on the finish
Overall: Tasty stuff for sure. One of the first Ecliptic beers I tried when they first hit the scene and glad it stuck around. Good balance and a great combo of hops that brings ‘new-school’ and [somewhat] ‘old-school’ flavors (Simcoe & Mosaic) to the table in harmony. Delicious and recommended

12oz can - I'm currently re-reading Bill Bryson's A Short History of Nearly Everything, which makes my brain want to go all retrograde 'n stuff. Yeah.

This beer pours a slightly hazy, pale golden straw colour, with a teeming tower of puffy, loosely foamy, and rocky off-white head, which leaves some stellar tacky snow rime pattern lace around the glass as it lazily subsides.

The carbonation is adequate in its palate-coddling frothiness, the body a decent medium weight, and generally smooth, with a wee airy creaminess edging its way in as we all work our way through these shenanigans. It finishes off-dry, the citrus component exhibiting the most lingering gusto.

Overall - this is surely a pleasant enough hopped-up version of the style, nice and crisp and sassy in its bearing. Easy to put back, whilst pondering the oncoming zombie (in a metaphorical sense, one would hope) apocalypse.

A thanks to the captain of the canquest, woodychandler, for this beer. Poured from a 12 oz. can. Has a hazy golden color with a 1/2 inch head. Smell is of citrus, little else. Taste is of citrus, tropical fruits, malts in the background, bitter for the style. Feels medium bodied in the mouth and overall is an enjoyable beer.

A summer seasonal, but canned on August 28th, but whatever. Frothy pour, modest head, slight haze. Pronounced hop aroma - Simcoe's distinctive tropical fruit comes out front and center. The beer is pretty hop-forward for a PA, veering into IPA territory. Tha malt plays a definite second fiddle to the bitterness of the hop bill. We enjoyed it a lot. Tasty and well made.

12 oz can into IPA glass. Dated 7/3/18.
Look is semi-clear golden yellow. Nose is light fruit. Taste is light fruit and stays sweet through out. Feel is light. Overall, very nice APA. Would like to try fresher version. Would buy again.

Same body color but the head is thicker and stickier. Still has a fine aroma. The taste seems bolder; more hoppy and bitter. Mouthfeel has really improved; medium-heavy body; still a bit rough on the palate but it seems more appropriate this time. An excellent pale ale all around.

A decent pale ale, flavorful and full of hop bitterness and bite.

Love this floral fruity beer. Perfect for guzzling on a hot day.

Pours bright yellow gold with a foamy white head that laces well. Some fine crushed grain like particles in suspension. Aroma blows you away right from the crack of the can. Tons of citrus, tropical fruit, and weed. Flavor packs a punch of mango, grapefruit, and pine with a touch of dankness coming on the back end. Feel is perfectly crisp and fresh, light and bright, bitter but close to balanced, and very easy to pound. Overall, this is a wonderful classic style pale ale with new(er-ish) hop varieties. I could drink this all summer long. Cheers!

Poured from a can into a tulip glass.

Aroma is pungent pine mixed with tropical fruits and citrus with an underlying caramel malt backbone.
Appearance is golden orange and mildly hazy with a pure white head that quickly dissipates.
Taste of the hopping is immediate juicy fruits like papaya, mango, and peaches. There are citrus components of tangerine and oranges and some pine. The malt is a moderately sweet with caramel and some biscuit flavor. but balances fairly well with the hops bitterness to provide some balance.
Mouthfeel is somewhat thick for a pale and does not finish as dry as I would expect. The bitterness is somewhat cloying to the palette.
Overall this is an easy drinking pale ale that is venturing into IPA territory by the sheer hop presence. Very drinkable and a great showcase for simcoe and mosaic hops working together to produce a fruity yet piney new school west coast style pale.

A mildly hazy amber with a dense, off-white head with good retention and lacing, this looks solid. The nose is dominated by the dry hops with peach, grape, cotton candy and a little grass present. The Simcoe hops are bright and snappy, and the Mosaic adds a nice tropical fruit note. The light grassiness is noticeable but doesn't hinder enjoyability too much. The palate opens clean, fresh and fruity, with a blend of peaches, pineapple, grapes and a little passionfruit. This is accompanied by a mild bitterness that is oily and mildly grassy. The mid-palate has a mild doughy/biscuit like malt character. Creamy on the palate with soft carbonation, this is quite expertly conditioned - I'd love to try this on cask. Drying on the finish with a pleasant bitterness, this beer is quite excellent.

Moderately hazy, golden color, foamy head with streak lacing. Aroma is tropical fruit and caramel malt. The flavor is similar, with some herbal notes and citrus and pine. Hops bitterness in the aftertaste. Great flavor for a pale ale. Dry and crisp finish. A very good beer overall.

Pours a hefty two finger white head into my can-style glass. I can hear the head fizzing. The head is relatively soapy looking. After about a minute, the head is half gone. After two minutes, it’s mostly gone. Some suds lingering. The body is a dark orange, copper color, almost hues of brown or amber. Very clear, visibility is high. Carbonation looks medium. After a bit, the head is completely gone, but there is a nice layer of film on top of the body. So far, that head was not impressive, but this color is intriguing me.

I keep running into the same damn problem with these hoppy beers. You crack the bottle and get a wonderful hit of hops to the nose. Then you pour it in a glass, the head dies, and so does the aroma. This glass is relatively good at holding in aroma, so it shouldn’t be an issue. Anyways, as for this beer, it’s much the same. I just really don’t get much of a hop presence here, some faint tangy, piney hops. Not really getting the mosaic here. I mostly get a moderately sweet malt character, caramelly, borderline biscuity, with what I can only describe as a burnt characteristic. Perhaps some citrus notes. I mean this is a weird smelling beer, the hops are kinda there enough to confuse me when the real aroma hits in the form of biscuity, roasty malt. It’s not bad just….what’s going on?

As this warms, the aroma is turning into much more of a floral bomb, and that’s taking on that sweet character rather well, bumps it up to a 3.5 from a 3.25. Still getting that biscuity malt. Honestly not a bad smelling beer, just smells way more English than American to me, and that’s not what was advertised.

Yeah, flavor is much the same. This is in no way, shape, or form a “summer” beer, this is an English pale ale. I don’t want malts when I’m expecting something light and crisp. Moderate to low bitterness hits from beginning to end, with no offensive bitterness lingering, finishes with a smooth maltyness. Very light caramel flavors, biscuity, but not too sweet on either accounts. This is actually a really nice beer, it’s extremely clean, extremely well balanced, and neither the bitterness nor sweetness overwhelm. I would give this beer a higher grade if it was the correct style, or advertised the correct season. Regardless, it’s not blowing my socks off, but it is a fantastic go-to beer, very solid, and well done.

The mouthfeel is very smooth and sessionable, which goes well with this more moderate pale ale. Carbonation is on the lower side, but it works (although that could be largely due to my constant swirling in effort to get a bigger aroma). Body is a little thin, but again, it’s fine for this beer.

The drinkability is awesome, this is a great beer for a fall day (not summer day).

Overall this is a really nice beer, maybe it deserves higher than a 4, but I aint givin it up that easy. Anyways, good beer, balanced, clean, drinkable.

The appearance turned out pretty meh. The lacing was basically not there at all, and the head was not impressive to begin with.

Some tropical fruit did start to come out as this beer warmed up.

Quasar pours golden with a foamy white head and a sticky lace. Spicy, herbal and pine aromas with tropical fruits beneath greet the senses. Smooth with a soft carbonation. The palate is immediately hit with fruitiness, as berries, tangerines, and papaya follow one after another and then pine and an earthy and raw, leafy finish thanks to dry-hopping with Simcoe and Mosaic. There's a quick hit of bubblegum, too. Malts, which provide some backbone, lend a touch of toastiness and a clean breadiness throughout. Packed with flavor, this beer is a most crushable Pale Ale.

Massively fruity with a bitter backbite. Attractive golden amber brew with abundant foam in the bulbous top glass. Sharp and astringent on the tongue. Vast expanse of hop aromatics but it seems like an overdose of Simcoe. Musty, woody, and citrus rind immediately attach to the taste buds.

Expansive aromas of lime peel and then a trip to the dankness. Spritzy and acidic mouthfeel. If there is malt it's only to mask the alcohol, slightly. Dogged bitterness clouds the senses. From the 22 oz bottle purchased at Central Market in Shoreline, Wash.