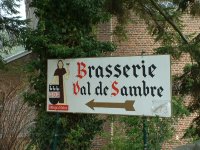 Val De Sambre, was an Abbey Brewery without a Brewery. It has now completed the successful commissioning of its own plant. Their beers have been in existence for some 25 years & had been brewed under contract by some notable luminaries, most recently by De Smedt (Affligem).

The 1st Brewery Visit of the Sunday morning on our recent Belgium Trip. What better way to spend Easter Sunday than in an Abbey Brewery? We arrived at 11am after our Coach Driver had expertly negotiated the twisty country lanes of the Hainaut province.

The Brewery is located with the small Tasting Café in a very old building, alongside the ruined Abbey at Gozée. It was a beautiful sunny day & the ruins looked resplendent in the peaceful countryside. We followed the sign that pointed into a small courtyard, advertising Brasserie Val de Sambre. Once there, a life sized jovial looking wooden monk pointed to the entrance with a raised beer.

Inside, as you enter in the middle of the building, is a smallish, chest high bare-brick circular bar. To your right, is the Brewery itself. The whole brick building has thick solid stone floors. The roof is of a construction long gone. It has those tightly packed brick-arched roofs that are supported at approx. 6-8 foot intervals by a myriad of large stone pillars about 12' tall. It sort of reminded me of old Roman/Greek Temples.

The Brewery is on open view; alterations cannot be made to the building for historic reasons. As such, Stainless plant would have looked just a touch too modern. For the first time that I can recall, all of the equipment on view is either of all-copper construction, or as with the storage vessels and piping, totally covered in copper cladding that give this impression. It all helps to add a very in keeping traditional feel to the place.

The beer range starts with the Blanche de Charleroi, the staple 5% Organic Wheat Beer. Then at 5%, 6% & 7% respectively, it brews an Ambrée, Brune & Blonde. Also does a 9% Triple Blonde & Triple Brune, & a Xmas beer.

In the Café, all of the beers are served in a lovely ceramic grey goblet with a dark blue painted rim with the Abbey dAulne crest stamped on them (the letters ADA topped by 3 Geese). These are great to drink from & available to buy.

As is becoming more popular I note in Belgium, it also distils one of its beers. In this case the Brune, to make a 40% ABV clear spirit, called Esprit dAulne. Its an ass-kicker!!

Brasserie Val De Sambre in Gozée, Belgium
Brewery rating: 3.62 out of 5 with 258 ratings