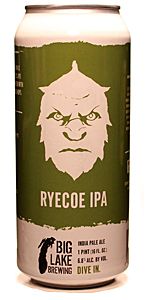 Notes: Flavors of rye and citrus, with a mild caramel, orange zest, and a delightful bitter-smooth finish.
View: Beers | Place Reviews
Reviews: 11 | Ratings: 67 | Log in to view all ratings and sort

A little disappointing - a nice, safe, easy to drink beer but a little boring and unassuming. Nice clear golden color with minimal head and really not much lingering lacing at all. Smells very faintly of rye and a little caramel. Tastes of rye, malt, grain, biscuit and some caramel. There really isn’t much citrus zest or bitterness to speak of. Mild mouthfeel and decent carbonation. A nice sessionable beer but I expected a little more from the previous reviews.

This was a lighter smelling and tasting rye ipa. Definitely didn't start smelling stronger until 60 degrees

Single 16 oz can from Horrock's for $2.99. Poured into an English pint glass. Not sure if I poured incorrectly, but no head formed. It smelled fruity, crisp and pleasant. More grapefruit than orange, which was nice. Nice mix of sweet and spicy flavors, and I enjoyed the little bit of bite to it. Easy drinking for me though it did get a little less pleasant toward the end when it started warming up. A tulip glass would suit it better.

I picked up a can of Big Lake's Ryecoe for $2.79 at The Lager Mill. I'm in the mood for something hoppy and it's been a little while since I've had a rye beer, so lets see how it goes. 2016 Vintage. Poured from a tall 16oz can into an IPA glass.

A- The can looks nice, it's got a nice design to it and it's a little eye catching. It poured a nice orange amber color that took on more of a darker orange color with a fingers worth of creamy light tan head that died down to a thin ring that eventually faded away and it left some spotty lacing behind. This is a pretty nice looking beer, I but I wish it had a little better head and retention.

S- The aroma starts off with a slightly higher amount of medium sweetness with the rye being the first to show up and it imparts a nice spicy rye aroma that goes into some doughy yeast. Up next comes the hops which impart some citrus rind, green hop and floral hop aromas which lead into the malts which impart some bready, biscuit, lightly toasted malt, caramel malt, light sweet malt and grainy aromas. This beer has a pretty nice aroma, all the aspects that I was looking for showed up and it has some nice balance to it.

T- The taste seems to be pretty similar to the aroma and it starts off with a slightly higher amount of medium sweetness with the spicy rye still being the first to show up and it shows up just a little more than it did in the aroma and it leads into the hops which impart all the same aspects that it did in the aroma, but this time it imparts more citrus rind aromas which show up the most and the impart some nice orange rind like aromas. Up next comes some noticeable doughy yeast which leads into the malts which show up just as much as they did in the aroma and they impart all the same aspects. On the finish there's a lower amount of medium bitterness with a dry spicy rye and hoppy aftertaste. This is a pretty nice tasting beer, all the aspects show up nicely and the balance is right where it needs to be.

M- Smooth, pretty crisp, a little tingly, slightly prickly, dry on the finish, on the slightly thicker side of being medium bodied with a higher amount of carbonation. The mouthfeel is good and it works well with this beer.

Overall I thought this was a pretty nice beer and a nice example of the style, it had all the aspects that I was looking for and they each showed up just enough and no single aspect ever got to be too overpowering. This beer had nicer drinkability, I could drink a couple, but the tingly mouthfeel might start to wear on me after more than that. What I like the most about this beer is the balance, how true to style it is and the mouthfeel, to me those were the highlights of this beer. What I like the least about this beer is nothing, there isn't anything that I disliked or that doesn't belong in this beer. I would buy this beer again when in the mood for the style and I would recommend it to anyone looking for the same. All in all I was happy with this beer, I haven't had the greatest luck with this brewery, but this one turned out to be pretty nice and I'm glad I gave them another chance. It's now my favorite beer from Big Lake and it's a nice example of the style. Nice job guys, this is tasty beer, keep it up.

This pours a pleasing amber tinged honey in the glass. Light bready rye note complements a pleasant piney hop aroma. There’s a hint of spice from the rye bill, but it’s balanced and incorporated well. This was a tasty sipper.

Pours out to a slightly hazy light amber, forming a tall meringue like white head with very good retention and solid sheets of lace. Canned. ~2.5 carbs or so. Floral hop aroma of simcoe...a little pungent, resinous, piney, and fresh. Mouthfeel is nice, medium bodied, not too astringent, finishing dry. The taste is pretty good. Fresh hop flavor as described above with a decent pale ale malt backbone. I can't distinctly say there is rye in here as far as flavor goes. Mild cat pee. Bitterness is medium firm, finishing dry with hop acidity. No perceptible flaws in nose, flavor. Clean yeast profile.

A solid IPA from a brewery I've never tried beer from before. Worth trying, especially for hop heads.

Pint can into a tulip.
Pours a muddled red/brown with a small head. Slight lacing as I drank.
Big hits of lemon, grass, floral and grapefruit on the nose. Lots of citrus characteristics, pine and grassiness, subtle spiciness from the rye. I found the mouthfeel needed some boost but overall it was drinkable.

O - A nice IPA. The flavors are balanced and sessionable. Worth checking out.

A rye IPA brewed with all Simcoe and 25% rye.

Pours a hazy caramel red hue with a substantial off-white head. A good 3/4 inch head floats to the top using a mildly aggressive pour. The lacing is great...I like the way this beer looks.

I get a toffee laden grapefruit scent which is subdued. Some notes of pine and floral bouquet wants to come out but it is hidden. I think the aroma is the weak point of this beer.

Upfront, grapefruit and orange zest greet my palate. Immediately, a substantial rye and caramel malt backbone steps in to curb the citrus hit. Toward the backend, the citrus hop meld bitters the tongue with a piney citrus rind bitterness that lingers.

The non-aggressive carbonation helps coat my palate with an oily, buttery texture. The resulting feel is medium full with some drying in the end.

This is a solid drinker that satisfies the hop head without over stimulating the senses. I enjoy it and would buy again!

Ryecoe from Big Lake Brewing
Beer rating: 89 out of 100 with 67 ratings