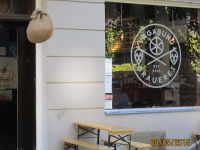 Reviewed by MalzMeister from Virginia

3.96/5  rDev -1.7%
vibe: 4.25 | quality: 4 | service: 4 | selection: 3.75
Started by 3 American expats in Berlin, the pub seeks to bring craft beers to a city population that has had decent, but not great, beer on general offer in the traditional bars of the northern part of the city known as Wedding. Part of the new wave of brewers seeking to bend the "Reinheitsgebot" rules on brewing, they offer not only their own "nano-brews," but also guest beers from Germany and other countries (including Denmark, Norway, Great Britain). With a good selection of bottles, many of them American or Belgian, the taps are the real draw for serious drinkers in northern Berlin. Their own ales include a very good American IPA and a very nice, dry Imperial Stout.
Mar 23, 2014

Reviewed by pthread1981 from Germany

4.64/5  rDev +15.1%
vibe: 4.5 | quality: 4.5 | service: 4.5 | selection: 5
I finally made it out to Vagabund and boy am I glad I made the trip. I might be tempted to blab about other things, but lets get right to the beer. The place has four rotating drafts, usually one of theirs and three guests. These guest taps tend to be pretty good, recently it's frequently been Mikkeller and Brew Dog variants as well as another German craft brewer, but this changes frequently.

I had their double IPA and it was good. I'm really looking forward to seeing some of the other styles they list on their site like the Coffee Stout and the Saison - things that are even more rare than IPAs (which are themselves a rare animal!). Definitely the great rotations are reason enough to come back, but towards the end of the night I discovered the bottle list, which was fantastic. With the bottle list in the mix (I'd like to go into more detail, but like I said, it was the end of the night when I discovered it :) ), I have to say the place has the best selection of any bar I've been to in Germany.

The atmosphere was nice, the staff very friendly. Ask about the cool painting up on the wall. I don't know if they serve food or not.