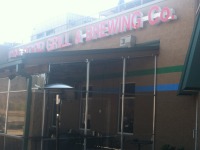 Very cool place to hang out and enjoy great beer. They've got an indoor bar and lots of seating there, at tables inside and a massive outdoor space. There's usually a food truck there - call ahead and confirm. This is a must-do spot if you're in the area and love beer. They're doing some damn nice things with hops. Snag a flight and thank me later. Cheers!

Good food, especially the pizza. Their beer tastes like it came from a homebrew kit circa 1996. Not a place to stop for beer, especially if you're from out of town. The quality of the beer is sadly lacking.

Lynnwood has always been a great place, but now that they brew their own beers (some phenomenal hoppy beers at that) it is a must see. If you can get your hands on a Hubris Imperial IPA you won't be disappointed. If you can't, the Hop On Top IPA or Mosaic Pale Ale are pretty close.

Vibe: Typical American restaurant/pub not too different from an Applebees/TGI Fridays in decor. I visited in the early afternoon during the week and overall there were not a lot of other customers so the place was not too loud. It looks like it could get real fun come the late spring/summer in the evening with the outside seating area and the rooftop bar.

Quality: Beers were well poured with proper amounts of head and the correct temperature. There were at least a couple of different styles of glassware though it seems like most were being served in pint glasses (though none were real high ABV that I ordered).

Service: Bartenders were friendly and knowledgeable about the beers as well as the greater beer scene in Raleigh. Prompt service.

Selection: Pretty decent selection especially for the house beers as well as some of your more standard bar staples (macro and national craft brands). A decent representation of styles.

Food: Overall the food is typical for an American Pub but the pizzas are pretty good (reminiscent of Lilly's Pizza from which they started long ago). Nothing special and the portions are reasonable to large for the price.

The location is fascinating to me. You don’t typically find a brewery in a large, unattached building that was obviously constructed with a restaurant in mind. It looks more like an Applebee’s or an Outback Steakhouse from the street. It makes me think that either the brewery was tacked on to an already successful establishment, or they had some major financial backers from the get-go.

In any case, the interior doesn’t do much to detract from that typical American restaurant atmosphere. Yes, it’s nice inside, and, yes, it is unnecessarily dim at times. There’s the ubiquitous wall hangings and plenty of televisions.

It’s a nice joint, but there’s nothing special about it.

The same can be said for the food. I ordered a burger with a side of onion rings. Like any other American joint, you get plenty of grub for your cash, but it’s also all coming in frozen through a ubiquitous food supply truck. That doesn’t mean it’s bad – the onion rings were particularly crunchy and tasty and were probably hand-dipped – it just means that you get a run-of-the-mill burger on a run-of-the-mill bun. That’s pretty much what I expected going in.

The beer, however, delivered above expectations. Perhaps I wasn’t expecting much, but I was surprised by the wide assortment of offerings. I think there were upwards of 12 beers on tap the day that I visited, at least half of which were seasonal and interesting (read: high ABV). A few IPAs, an imperial stout, and a bourbon aged porter to choose from…sign me up.

The bourbon-aged beer and the imperial IPA were both very tasty, and all the other styles were certainly drinkable. I’m not sure I’d go out of my way to come back that far outside of downtown Raleigh, but I bet they have a stranglehold on the local market, and there’s a ton of people who live between the beltlines out that direction.

The service was pretty decent too. I never had to wait to put an order in, and they didn’t mind me taking up a corner of the bar with a computer and backpack. Of course, it was pretty empty in the middle of the day, but still.

My wife and I stopped by after hearing good things about thier double IPA. Unfortunately we missed it but I was still glad we went.

The location, appearance and crowd would have you thinking more Texas Roadhouse or Friday's than craft beer but don't let them fool you.

We started with the IPL and IPA. Both were fantastic with the IPL being better by a narrow margin. We then had the Mosaic Pale Ale and the Imperial Red. Again, fantastic. They really know their hops.

For food, we had the Philly Cheese Steak and Chicken Parm. Both were solid. The wedge fries they came with were fantastic.

Our server was outstanding. He really new his beer and had great advice.

I can't believe we just found this place. We'll definitely be going back!

Stopped in for dinner after a pickup at RDU, and this place was packed. It was Monday night, so it was football on all the televisions, and there are about a dozen of them throughout the restaurant. This place gets pretty loud, so be prepared to flex your vocal chords while you are there. Pretty long bar, and a ton of booth and table seating throughout the multiple rooms. From where we sat, you could spy the brewing area through a window. The waiter we had was on top of it, very prompt and friendly the whole time. The food was decent. Typical sports-bar menu, with plenty of apps, finger foods, burgers, and sandwiches. There were 8 beers on-tap, as well as full bar service. Growlers to go, and the beers were pretty decent. This is tucked into a shopping area, and if you find yourself in the area, it's worth checking out.