The Nuclear Whim With The Fuse Of A Mile
Bissell Brothers Brewing Co. 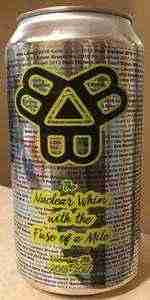 Notes: An IPA to celebrate our 4th year of existence.

First from Bissell Brothers (thanks @WunderLlama!) and enjoyed it quite a bit. Just not as much as some of the other NEIPAs I have tried recently.
The appearance wasn’t bad- just darker than what I was used to and the aroma was very difficult for me to pin down, definitely hoppy and maybe guava or something, a faint smell of citrus and a lot of other stuff. Again, not at all unpleasant, just hard to define.
The taste was similarly difficult for me to define, nothing stood out or shined through the swirl of flavors that were present. The oats added smoothness, which, I suspect, was likely needed for this, but it worked for me, definitely easy drinking and pleasant feel.
Thanks again for letting me try this, maybe I will like their 5th year special more.

16 oz can into a willi belcher.

Pours an opaque burnt orange color with 3 fingers of creamy off-white head. Very good retention, leaves a ring of lacing around the glass. Ultimately settles into a thick blanket of foam.

The aroma brings notes of pungent overripe mangoes and honeydew melon, followed by some fresh pineapple and papaya. Mostly tropical with just a hint of citrus. Not a lot of malt to speak of.

The flavor follows the nose: Melon, mangoes, pineapple and papaya with a touch of grapefruit and orange flesh. I know "juicy" is an unpopular description of flavor but it's absolutely necessary here.

The feel is medium bodied with moderately low carbonation. Very soft and smooth. Faintly dry on the finish. Creamy.

Overall, damn. I'm not sure why I had low expectations for this beer but I did and I'm happy to have been hilariously wrong. This is a fantastic NEIPA that can absolutely hang with the best of them. Give me this over Swish all day long.

Nose is citrus, orange candy and pineapple. Moderately aromatic. Beer opens orange, papaya, and pineapple. A fresh, piney hop presence is detectable in the background but it's not bitter and lends a lightness to the flavors. More papaya at the finish with clementine-like sweret aftertaste. This one's juicier than most. Body is light with moderate to ample carbonation. Smooth and foamy on the palate and goes down crisp, aggressive, with a lingering, sticky finish. Very drinkable.

Poured from a can dated 5 days ago into a tulip glass. Rich and hazy golden yellow color. Not too much of a head, although I was super gentle with the pour. Some minimal lacing. Tropical guava, mango, grapefruit, and pineapple on the nose. Flavors of tropical fruit punch with resinous hops and earthy honey on the finish. Not too sweet or bitter. Really well balanced. Chewy mouthfeel. Really solid NEIPA if you’re into the big juicy ones.

Beer is a bright and hazy. The color is almost banana yellow. Aroma is soft and tropical: mango, guava, apricot. Taste follows the nose. Lots of tropical notes, but also nicely bitter, so it's not cloying or candy-like. Mouthfeel is excellent. It's gently carbonated and smooth. Overall, this is a really good beer. Big, tasty, balanced, interesting, and very drinkable.

Pours a brownish yellow hue, entirely opaque - turbid - muddy, with a fat finger of dense ivory head that slowly recedes down to a cap and collar, leaving appreciable lacing.

Nose: Saturated. Candied pineapple, candied orange and grapefruit, sweet dark berries, coconut, lychee, dragonfruit, tropical melon, lemon zest, kiwi, muscavado sugar. It's unreal, and unidentifiable. This is some serious hopping, and the aroma is far too dense and complex for me to adequately pick apart. Really something special and unique.

Palate: The candied sweetness you get on the nose is very much present in flavour. An instant kick of sweetness before anything else. The insane fruitiness that was hinted at does not translate on the palate. Instead, a plethora of vegetive, herbaceous flavours bombards the taste buds. There is a firm, biting bitterness, that slowly begins to attack the sides of the tongue, rather than the top front. Astringent. Like pure lupulin powder. Along with this astringency, a somewhat sour note shows up, giving an unusual flavour presentation, and reminds me slightly of sour milk, wet decaying wood, and cigar smoke. Some green grassiness kicks in, with earthy undertones, and this whole flavour combination unfurls into the finish, with everything slowly fading away, as the beer becomes drier, leaving only the bitter grassy flavours, a hint of sourness, and that odd astringency.

Mouthfeel/Body: Full, rich, soft, creamy, and dense. Full on New England hop smoothie, and par for the course, for Bissell. Effervescence is actually quite higher than I would have expected. It gives some nice texture to the body, even if it does take away from the softness a tiny bit. But that's okay. Beer should be bubbly. Not a midday refresher. This is a big, bold, brazen beer, and probably drinks best at the end of the night. It's heavy.

Overall: I'm not going to kid myself, (or you, the reader), I'm not loving this beer. The aroma really got my hopes up. It smells pungent, sweet, exotic, fruity, and complex. Unfortunately the flavour and aroma have little in common. There must be a crazy dose of hops for there to be such an intense bitterness, and it almost seems like it's saturated with lupulin powder. It's not a classic piney, resinous bitterness. It's a tongue curling, astringent, concentrated bitterness that evokes images of cigar ashtrays and spoiled milk. It's bizarre. I hate to say this, but perhaps it's just...over-hopped. If this uses lupulin powder, then I think pulling that would greatly improve this. If it doesn't, then those are some insane hops, and they went a little heavy handed with them. This beer had potential, and you can still taste it, but the hops just got in the way. I'm not one to complain about a little bitterness or astringency, but this is serious. The flavour profile being way more earthy than bitter does the beer no favours. Bitter and delicious, I'm all in for. Bitter and earthy and woody and tart and cigary? I don't know. I'll have to try a later batch and compare. Fear not, though, as Bissell still has some fantastic beers in their lineup. This just isn't one of them for me.

Poured into a 13 oz Free Will glass canned on 3/13/19. Pours a very hazy dark yellow oarange with a finger plus sticky white head that spotty streaks of lace behind with excellent retention. 4.75

Taste follows juicy and crazy tropical all the way pineapple, tangerine, guava, passionfruit, and a little hit of grapefruit but very little. 4.75

Mouthfeel is bigger than average, soft gentle carbonation, not dry but a tad sticky from all the fresh hops, and at 7.6% ABV so crushable, but loaded with flavor. 4.75

Overall this is a wow beer, I will put this one in the Big Leagues with many other NEDIPAs in the country. 4.75

L - big floofy head that looks like my cat's soft underbelly. Pitch... swamp? Color? Murky brownish orange and boy it sure is a solid brick of haze.

S - fruity and undeniably juicy. I know how much you all love that descriptor. There's a bit of weed dank floating about, but the main attraction is soft, peachy, mango pineapple with a grainy, doughy, coriander..y orange bubblegum.

T - ripe and tropical. Melon, cantaloupe, banana, and guava. Definitely some lupulin bitterness that sits in the corners of your mouth just smoldering away. Loads of orange and bubblegum. Fruit salad for sure. Mild acidity on the finish with a touch of yeastiness.

F - velvet dream. Smooth as butter, harking back to that soft underbelly. Low carbonation to increase the viscosity, but just enough to remain lively and entrancing.

O - such a bright, flavorful, and tropical beer. May even give Swish a run for its money. Sates the juicebomb guilty pleasure in all of us, yet bites back with commanding bitterness.

This beer pours beautiful hazy orange juice color with a petite head and big lacing retention. The aroma is outstanding with a plethora of over ripe fruits including melon, stone fruit, guava and grapefruit with a hint of lemongrass and a smokey earthiness. The taste is juicy up front with grapefruit and lemongrass, with a slight undertone of hop bitterness that gives way to a smokey astringent flavor, as it finishes quite mild.

This one pours a nice golden hazy orange color, with a small head, and lots of lacing.

This smells great- there's a big earthiness here, like leaves, white pepper, and juniper almost, with more traditional big juicy mango and some grapefruit, and some piney hops.

African Queen hops are clearly very unique and divisive- I think it works well here. There's lemongrass and juniper, and some light peppery notes. Above all of that, there's a long juicy and clean finish, mango, stone fruit, and grapefruit, with a healthy but clean bitterness.

This is medium bodied, slightly creamy, with a great level of drinkability.

I hope that I can try some more beers with African Queen hops in them. It might not be possible, as AB-InBev bought out the major supplier of South African hops.

2018 edition. Lots of overripe melon rind flavors, slightly earthy with a vague pepper note and some grassiness on the backend - I wouldn’t immediately identify it as a NE IPA for whatever that is worth. Definitely needed something bright to contrast with those earthy hop flavors

Disappointed in this one, I am usually such a fan of Bissell's higher octane IPAs/DIPAs. I think there is something happening here, a secondary fermentation? The smokiness even present on the nose underlies a slight souring, at first I was hopeful it was a grapefruit astingency from the hops. If it is only the South African hops that create this smoky flavor then man I hate those hops. Hints at full mouthfeel but doesn't quite get there and feels almost oily.