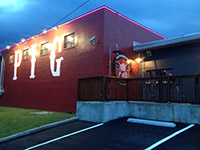 Stumbled past this place looking for a wine bar. Managed to find it an am I glad I did.
14 taps in action mixed between house crafted brews, local and regional brews and a couple token hard ciders.
Nice quiet place with bar seating inside and a large patio area.
Boar brown is smooth drinking beer that pours with a chestnut brown color and 1/2" thick head. The head diminishes quickly.
Truly enjoyed this place and thier craft beers.
Come and try a flight!

Cool little tap room. Bar seating, as well as some outdoor patio seating. There is a television for any sporting events to watch while you are there. The walls are decorated with some old school arcade artwork, a ton of beer-themed quotes, and pigs, of course. They have a tweeting station which consists of an old e typewriter that you fill out color coded post cards and then post on a bulletin board. Pretty funny. The bartender was friendly and helpful. They had 6 beers on tap, and 4 guest taps. If you get hungry, there is a food truck there some days, and some of the local restaurants will deliver, as well. Pretty fun spot to visit.

Stopped in around 6 on a Thursday night. Small tap room. Big bar with not so comfortable metal stools. Two other couples there. Three big TV's with one of them showing various angles from the brewery which I found myself mostly watching. Later found out they had seats right by the brewery so you could look in and see what was going on.

Well done mostly English style beers - mild, brown, plain, ESB, stout, and a hefe which they were out of. A couple of them had pumpkin/holiday spiced iterations which were done with just the right amount of spice. Had two flights so I covered all of the house beers and was able to add one of the guest beers (good style varieties) to my flight.

The gal who was brewing came out to the bar before shutting down and I had the opportunity to chat her up and get a tour of the brewery. Mostly interested in the pilot Sabco system but otherwise a very nice clean set up. The place is owned by a local restuarant group which obviously put the money into doing this place right.

Even though English beers are not my top style, I thought they did a nice job with the beers and providing good variety of guest taps. Would surely visit periodically if I was local and especially if they mixed up styles (they had a barleywine coming up soon when I was there).

I am biased because I truly love good British beer, and in my opinion, this is the only place around to get really tasty, honest to God British beer. Sam and Geni are good people and they make fantastic beer. If you go no where else in Greensboro, be sure you make it here

I've been waiting a long time for this place to open, and I was not disappointed! The atmosphere at Pig Pounder is fun and entertaining. They are very clean. The beer is outstanding! I loved the video playing (there is even video in the bathrooms!) There are plaques around the brewery explaining things so that you can give yourself a tour even if there isn't someone available to give you a guided tour. The patio is amazing - I can't wait to bring my friends here for a party!

Great location, right off the intersection of Battleground and Wendover in Greensboro. Unique layout and creative atmosphere. Beer selection is great. Can't wait to try the patio. The pig sayings on the walls are also with the visit. Don't forget to come and get a growler.