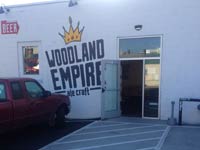 this place is making some of the most creative beers in boise, at least so far in my experience, i have been both surprised and intrigued by almost everything i have tasted from them so far, core beers in their mixed twelve pack notwithstanding. i think they have the right mix of creativity and approachability in their stuff, enough to pull in the nerdiest geek enthusiast but not so drastic that it pushes away the basic craft fan, just right. their space is pretty normal, smaller than i thought it would be, with a small bar and just a handful of tables inside, and a patio that cant seat more than twenty outside, maybe more like a dozen, relatively mellow both times i have been in so far, and with some of the nicest folks i have met anywhere in idaho yet! great service, and such a cool list of beers. things like blueberry brut ipa, white chocolate helles lager, and a weird one with smoked bananas adorn the list, alongside some of their classics like the amber and the ipa, all of which have been really good. they are adjacent to a cool little food place, so there is good eats right there, and overall i think the vibe and the beers are right on. way more exciting liquid in here than most other places we have gone around town so far, and i plan to become a regular here, as they seem to be constantly coming out with cool new beers. near the top of my list so far in idaho!

Cool little spot with pinball machines, a good amount of communal tables, barstools, and seating outside, with simple and unique decor. Good list and variety of beers available, and all were enjoyable but the From Schwarzbier was easily my favorite. Staff was good, but seemed a little distracted whole we were there. Mix and match 6 pack cans to-go is a huge plus in my book, and perhaps my favorite thing about this brewery. Would have enjoyed to try Manfred's food next door while there, but ran out of time. Cheers!

I visited Woodland Empire a couple days ago when I was in Boise and it is a cool place. Dart boards, pinball machines, and a generally welcoming atmosphere. Service was good, although on a Monday afternoon the place was a bit dead and so my server's attentions were not split. They have 14 taps, with a pretty good selection of styles, and a guest cider and kombucha; overall the beer is pretty decent, if not outstanding. I'd return here.

Two visits during a June 2017 trip to Boise. Very good service on both occasions. The tap list is innovative and varied, and changes frequently. While no food is available directly, there’s an excellent food venue (Manfred’s) attached to the back of the building. If you are at all hungry, I highly recommend you walk over and place an order; it will be delivered to you in Woodland’s taproom.

13 WE beers on tap plus 1 cider and 1 kombucha. Beers were good or better except for one lousy Berliner Weisse. Pinball machines [3] and a superb food stop out back with deliver really raise the attractiveness of this micro brewery.

Very solid place on the outskirts/arts district? of downtown Boise.

Beers were solid across the board. My favorite was the City of Trees Idaho Pale Ale. One of the better downtown breweries. Prefunk beer bar is two buildings away.

One of my "go to" places in Boise. Atmosphere was kind of bubbly, yet subdued. Plain and simple décor, no TVs, eclectic music, food is from food trucks or local delivery when available