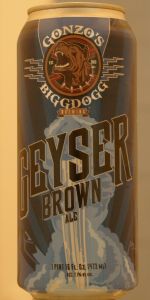 I am really digging deep into The CANQuest (tm) at this point, unearthing beer-filled aluminum cylinders that acCANponied me home at some point & became neglected in the interim. Yes, it's a tough life.

From the CAN: "A Benchmark of Balance"; "This named itself by always EXPLODING out of the vessel when it was made. So Geyser Brown was born, and the world is a better place because of it. Share this righteous brew when the occasion demands a blast of excitement and taste. [undersigned] Gonzo"; "World Domination".

I was muttering "No Geyser, no Geyser, no Geyser!" under my breath as I Crack!ed open the vent on this one. I exhaled a bated breath when nothing untoward occurred, Phew! I did not want to press my luck, so I performed a slow, gentle Glug into the awaiting glass so as not to create a Geyser. Again, I was successful. An in-glass swirl raised a finger of fizzy, foamy, deep-tan/light-brown head with modest retention, quickly becoming wisps. Color was Dark Brown to Very Dark Brown (SRM = > 27, < 34) with NE-quality clarity, giving off cola highlights. Nose had a milk chocolate & slightly smoky roastiness. Mmm. Mouthfeel was medium. The taste was not as sweet as the nose had led me to expect. Instead, it had a sort of ersatz chocolatiness, like carob. Mmm. I do not like carob by itself, but the taste in this beer was really nice. It gave it an edge that kept it from being too sweet. Finish was semi-sweet, in the sense of being a bit bitter, but still more sweet than dry. CANfused? Yeah, I'm going to give up & leave it at that. YMMV.

I picked up a can of Gono'z Biggdogg's Geyser Brown for $2.59 at The Lager Mill. I'm in the mood for a Brown Ale today and I thought I would give this one a shot, so lets see how it goes. 2016 Vintage. Poured from a tall pint can into a imperial pint glass.

A- The can looks nice, it's got a nice design that goes well with this beer and it's just a little eye catching. It poured a hazy amber color which took on more of a amber color when held to the light with a little over half a fingers worth of bubbly light tan head that died down to a thin ring that eventually faded away and it left a little bit of spotty lacing behind. This is a pretty nice looking Brown Ale, I have no complaints.

S- The aroma starts off with a medium amount of sweetness with the malts being the first to show up and the impart a nice caramel malt, bready, grainy, caramel and toasted aromas with a little bit of doughy yeast that leads into some sweet malts which show up more towards the end with a little more roasted aromas and a slight bit of fruity yeast. This beer has a pretty nice aroma, it's pretty much what I expect from the style.

T- The taste seems to be similar to the aroma and it starts off with a slightly higher amount of medium sweetness with the malts still being the first to show up and they impart the exact same aspects that they did in the aroma and it's followed b y a little bit of that yeast which is a lot more doughy than fruity this time. Up next comes the sweet malts which lead into the finish with no bitterness with the sweetness taking it's place and it had a toasted caramel malt like aftertaste. This is a pretty nice tasting brown ale, but I wish it was a little less sweet.

Overall I thought this was a pretty nice beer and nice example of the style, it's pretty much just what I expect from a Brown Ale and nothing stood out that didn't belong there/ This beer had nice drinkability, I could drink a couple, especially in the fall when it start to get cooler out. What I like the most about this beer is that it's true to style, it's pretty standard for a Brown Ale. What I like the least about this beer is the sweetness, I wish it was toned down just a little. I might buy this beer again and I wound't turn one down. I would recommend trying if if you like your Brown Ales a little on the lighter side. All in all I liked this beer, but I didn't love it, it was still pretty solid for the style and nothing was wrong with it. IT's one of the better beers I've had from this brewery and it's slightly above average for a Brown Ale. Nice job guys, this is a solid Brown Ale, keep it up.