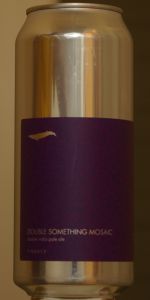 4.29/5  rDev -3.2%
look: 4 | smell: 4.25 | taste: 4.25 | feel: 4.25 | overall: 4.5
A: The beer is very hazy to cloudy pale dark yellow in color. It poured with a quarter finger high white head that left a narrow collar around the edge of the glass.
S: The smell is somewhat dank and has aromas of mango along with notes of herbs and stone fruit.
T: The taste follows the smell but the dankness is a little more subdued and there are additional hints of grapefruit and orange citrus. There is a light to moderate amount of bitterness.
M: It feels medium-bodied and a bit smooth on the palate with a moderate amount of carbonation.
O: I found the smell and taste of this IPA to be quite complex and interesting for a beer that only uses a single hop variety.

Reviewed by Braunmeister_1943 from Pennsylvania

F: Was expecting that LI/ Finback unique,
smooth and lush mouthfeel. Getting
a hoppy bite with some alcohol heat.

O: An outstanding DIPA. Was thrown a
little by the atypical mouthfeel I have
come to expect from Finback. I am
still very impressed. Not as great as
Oscillation but well worth the try!

4.04/5  rDev -8.8%
look: 4.25 | smell: 4 | taste: 4 | feel: 4.25 | overall: 4
The Something and Double Something single-hop beers from Finback have been overall pretty good to me in the past, so I figured there's probably very little reason to doubt that they can handle their Mosaic well-enough to make something in this vein that doesn't feel like a big mess, which can sometimes happen with bigger Mosaic-centric beers, in my opinion.

The pour of this one is an opaque orange juice color with an inconsistent but decent head of white suds forming a fairly-attractive collar, though it seems like the legs and lacing alike are biased to one side of my glass for whatever reason. The foam builds up quickly to about a finger-and-a-half, but dissipates after a few minutes to leave behind only a half-finger. Pretty nice looking stuff here, as is typical for these guys.

The nose is chock full of wild berries, odd spice, funky dankness, and a hint of grapefruit/pomelo, all topped off with a helping of B-vitamin-ish yeastiness and some esters. Well, this could definitely go either way, honestly. It has a decent amount going on, but it also seems a little too yeasty for its own good as well. There's also a lite grassy/oniony hint once it acclimates to room temperature, so I guess we'll just have to see if the flavor gets any kind of focus/specificity on the palate.

Yeah, it does, but I think it kind of also sacrifices some of the craziness and, with that, a bit of the interest of Mosaic in order to get there. I get a lot more pine and generic citrus (grapefruit rind/tangerine/pomelo) than I was expecting, and almost none of the blueberry/raspberry stuff that can sometimes come out with beers like this. I guess it's a tough balancing act, though, and I respect them for making something actually drinkable instead of just nuts. Dankness in the mid-palate with some stone fruit flavors, musky melon, and earthy spice toward the finish, as the ethanol prickles my tongue.

This is pretty drinkable and enjoyable but I don't think it's particularly excellent or anything, though I acknowledge that I am picky with this type of thing. It doesn't really feels too cohesive despite almost getting there, flavor-wise, and I think a cleaner base would help the unique qualities of the Mosaic pop a bit more, which I realize almost feels a bit heretical to say these days, in the years of haze we're currently going through. Pick it up, but don't expect to be blown away. Now, Double Something Simcoe...? That's a real killer.

4.1/5  rDev -7.4%
look: 4 | smell: 4.5 | taste: 4 | feel: 3.75 | overall: 4
Can. Pours about a 7.9 on the Haze-o-meter™. Big fluffy head at first. It dies off to a dappled layer of thin bubble patches. Shit ton of lacing, though. Aroma jumps out of the can. When the smell just rifles out of the can, you know it's probably going to be pretty decent. Very noticeably Mosaic. Intense notes of melon, mango, weed and greens. Mosaic is a great hop; not my favorite but one of the better ones. So this blast of Mosaic is impressive, but it isn't my favorite shade of hop. But that's being very picky. Flavor is juicy but also quite abrasive. Quite rich; literally started to attract fruit flies. Honey drizzled melon, guava and mango. All of the fruits are collected in a wrapper of pot and herby greens. Alcohol isn't shy. Body is full and the bitterness isn't overly oppressive. It's a big, badass brew. It gets a ton of point s for sheer force of flavor. I also enjoy that it isn't just a creamy-bomb (lol). Doesn't taste or feel like it was mixed with Half n' Half. I find that many of the style are like this. It's surprisingly lean but jacked with aroma and flavor. Impressive but for some reason I'm not in love with it. Maybe focus on Mosaic? Still quite a beer.
Sep 04, 2020
Rated: 4.5 by Justonemore91 from New York

Reviewed by BEERMILER12 from Maine

T: Follows the nose. Starts off with waves of tropical fruit and citrus. Some light floral and herbal notes. Light bitterness. Finishes with lingering tropical fruit

O: A juice bomb DIPA that is low on bitterness and high on drinkability. Mosaic-heavy for sure. Check it out

All the deepest, sexiest expressions of Mosaic. Not savoury somehow - proper tropical muck. I don’t know if this is quite up to what their neighbors in Brooklyn at OH are doing with the same hop, but it’s not far off.

Cloudy, glowing straw yellow appearance. The nearly opaque body was topped by a small, frothy, bright white crown that quickly fell to a thin collar. Dots of lacing stuck along the glass.

The aroma was a total Mosaic hop bomb. Super dank and weedy. Fresh bud definitely came to mind. Lots of fruity sweetness too. Overripe tropical fruits were apparent. Mango and guava for sure. Bit of tangerine. Hint of pineapple as well. A subtle onion-y character was also detectable.

The flavor profile was also super Mosaic forward and just as spectacular as the nose. Again, potent weed came to mind. Loads of sweet tropical fruitiness on the front end. Overripe mango and guava specifically. The beer was anchored by a stiff but not obtrusive, honey malt backbone. Overripe pineapple came through in the center. Bit of juicy tangerine flesh and pithy tangerine peel on the back end and the finish. More malt sweetness and a hint of bitter citrus rind lingered after the swallow.

Outstanding frothy, fluffy mouthfeel. Medium-full bodied for the style. The liquid contained a super fine, fairly zippy effervescence that fluffed up beautifully on the palate.

Double Something Mosaic is an intensely dank and tropical fruit forward double IPA and one of the best hoppy beers I have tried in recent memory. Fans of the hop varietal should definitely seek this out.