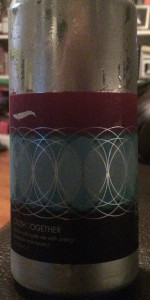 A: The beer is very hazy to cloudy whitish yellow. It poured with a short white head that left a thin collar around the edge of the glass.
S: Light to moderate aromas of coconut are present in the nose along with hints of oranges.
T: The taste follows the smell but also has additional hints of pineapple.
M: It feels medium-bodied and crisp on the palate and has a moderate amount of carbonation. There is a light to moderate amount of bitterness.
O: I liked this IPA because the coconut really stood out in the smell and taste. It also did a good job at masking the alcohol from the taste.

A very nice looking juice bomb of pineapple and orange color from can dated 04/08/21 COME JOIN THE COLLECTIVE. Great taste of citrus, pineapple and orange juicy. Creamy smooth mouthfeel with a bite. Obviously popular in the North East and I see why. Thanks JZeilinger for sharing. Outstanding beer.

Finback (in collaboration with J. Wakefield) are the makers of one of the coolest DIPAs I've ever had, Smooth Beats Miami, which fuses their signature hazy DIPA style with smooth coconut flavor. Back before Sabro hops were commonplace, this beer really made for a tropical treat that brought the refreshing and (at the time) unusual flavor of coconut into a hoppy experience that blew my mind. Now, years later, they have made Crush Together, a DIPA with not just coconut, but also pineapple and orange. Sounds exciting and exotic. Let's dive in!

As soon as I cracked my can, i was greeted with a rush of carbonation that almost leapt right out of the can itself, though it stopped just short of being mildly-explosive. Contents are under pressure here, which isn't always a great thing. As I carefully decanted the beer into my glass, its head built up quickly with about three fingers and it still almost overflowed. Jeez, guys! Luckily, I stopped just short of that situation, and watched as the large collar of foam bubbled away semi-quickly, leaving behind a half-finger ring and excellent lacing atop the opaque, orange beer.

The nose is strong orange and a wallop of pine-forward bitterness evening out the apparent coconut element that also jumps out of the glass pretty strongly. If it weren't for the hoppiness, this would probably smell exactly like a piña colada, but I'm really digging the balancing act going on here. Super dank grassy/green hops bringing out mango and pineapple-like notes to bolster the real fruit additions. Very much into this one!

Flavor is similar and pretty much what I expected, though it is very satisfying, and the feel is great too. Again, I'm really glad this has some bitterness and a backbone to it and isn't just a fruit juice bomb, though I must say that the lack of pineapple flavor is felt a bit. Perhaps they wanted to be a little more conservative with it, but it takes a backseat to the citrus flavors and the apparent coconut, which is a driving force still, even in spite of all of the balanced hop elements. Superb carbonation here; it really feels lively and it's not an overly soft or plush beer. Feels really dialed in and well-rendered. There's actually a hint of aggression and gusto in this beer, as opposed to many "super soft" hazy IPAs lately that really just end up homogeneous and boring on the palate. Really enjoying this. It's got me psyched for the summer to arrive. Maybe this year we'll actually be able to do things during the most enjoyable, outdoor-focused season.

Scored this from @jzeilinger . Poured into a 13 oz Teku glass canned on 4/08/21. Pours a hazy yellow orange with a massive 2 plus finger sticky white head that leaves a thick ring of lace with excellent retention. 4.5

Taste follows but coconut and orange cream sickle dominate, with pineapple and apricot an afterthought but still nice and different. 4.25

Mouthfeel is bigger than medium, soft carbonation, not dry but a touch sticky, and at 8% big on sweet flavor, but still really approachable. 4.5

Overall this is a really nice NEDIPA that really begs you to take another sip. Well done and worth a shot for sure. 4.25

Pours a hazy orange color; it looks like freshly squeezed orange juice. A modest layer of froth that retains well.

Amazing how dank this one smells even as soon as you open the can. Herbaceous notes of pineapple kush, (ha) tropical fruit juice, and pungent notes of lime, grass and chives.

Lip smacking my juicy but with tons of resiny hops. Notes of pineapple, mango, papaya, grapefruit, orange and lime; a perfect blend of tropical and citrus fruit. Lots of spice from herbal hops flavors, evoking pine resin, grass, pepper and chives. The malt backbone is crackery and biscuity and does a great job holding firm and supporting this impressive array of hops flavors. The finish is dry and displays a resiny bitterness.

Medium bodied with a nice “light on its toes” quality to it; very crushable for a DIPA. The mouthfeel is both smooth and slick, reflecting the hops oils, yet somewhat crisp with its biting hops spice.

Truly, this is the best DIPA I’ve had in a while! A total hops bomb, juicy, herbaceous and delicious. I’ll rate it highly.

T - Follows the nose with juicy dank citrus from start to finish. Citrus, orange, pineapple, and coconut are the main event with a small amount of pineapple rind added in. Starts sweet and juicy and ends more towards the middle with a balance between sweet and bitterness with a slight nod leaning towards the sweeter side. There's a little bit of vinous character to this beer as well and nice lingering resiny orange long after the sip.

M - Big medium body with a finish that dry out the mouth with just a little bit of juiciness around the edges.

O - This is an easy drinking D-IPA and really enjoyable. Recommended.

16oz. can served in a Spiegelau tulip. Pours a dull orange with a slight haze to the clarity and a rocky, one inch, bright white head that settles into a frothy cap. Nose expresses citrus, pith and perhaps a hint of lactose. Taste consistent with nose with the addition of flaked coconut and tropical fruit at the finish. Mouthfeel is light-medium in body with a carbonation shy of lively and a mild acidity. Overall, quite nice with a fair amount of complexity.

Really nice beer by Finback. I wanted to try it because of the coconut. That flavor note is very subtle but this beer does a great job of blending the orange and pineapple. This beer is totally refreshing and could be prolific on a shaded porch during the dog days of summer. I will definitely drink this one again!

Crowler from One Stop Beer Shop in Greece, NY.

This one pours a very hazy golden yellow color, with a small head, and lots of lacing.

This is really well done, as fruited IPAs go - which is a style I traditionally do not like. The coconut is done well, and does not enter suntan lotion territory. I think the pineapple and orange helps that - it adds a creamy and smooth sweetness alongside the fruitiness. There's only just the slightest touch of bitterness.

This is creamy, and smooth and drinkable. I could drink more of this than would be advisable.

It's hard not to like this, even though it's pretty silly.

poured into a tulip glass via can

color is a bright orange with beautiful white foam

smell is a nice mix of coconut, orange zest and pineapple

carbonation is medium as is the mouthfeel

love coconut IPA's and Finback has mastered the type..wonderful!

Light, golden and hazy. Mellow on the nose. Bitter front with hints of citrus peel finished by what I can only describe as the perfect piña colada. Very unique and well executed.