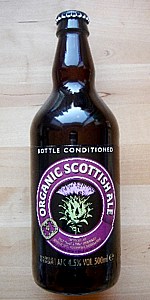 I must admit, I have to applaud Marks & Spencer for recognising real ale as an indivual drink section. On a recent trip I purchased a few bottles of their new selection of real ales.

The beer poured into a pint glass a mirky amber-gold colour, very poor clarity with an initial head that had a lifespan of 5 seconds.

The aromas the beer produced were no better. The dominant scent of bitter hops combined with rotten fruit mixed in with a cheap, lady's perfume. Very unpleasant indeed.

The taste was again dominated by an initial burst of hops followed by a bitter-sweet floral taste, again with a hint of past-it's-best fruit thrown in for good measure. The best part of the beer was the mouthfeel, it would have been a really good session ale had the taste been nice. A medium bodied ale that let you know it was a real beer, but at the same time not making you feel bloated.

However a beer is not purchased on mouthfeel. I finished the pint and would not order another one again. If this is what the supermarkets are labelling as quality beers then the future will be bleak. I hope that this is changed for a much better tasting beer.

Being one of Marks & Spencers newly released range of bottle-conditioned ales, this contract brew by Black Isle brewery is indeed a very welcoming sign that finally a quality supermarket pays serious attention to micro-breweries and their good stuff conditioned in bottles. The label of this ale specifies that it uses whole flower hops, leaves of Sweet Gale (a traditional Scottish herb), with peat-smoked malts  sounds very enticing, innit? BB 02/2008, served cool in a half-pint straight pint glass.

A: pours a slightly murky dark orangey amber hue, coming with a very faint and fast-dissipating bubbly beer head and pretty low carbonation.
S: the smell tells me that the bottle-conditioning attempt is NOT RIGHT  the stale sourness as of oxidised pears/apples, and mustiness comes from, I think, the unsettled yeast sediments, despite an unmistakable note of malts. If there is any Sweet Gale, hop, or even peat-iness, Id have to say that escapes my mind completely The smell is a mess, simply put, even at the brink of being a disaster.
T: lightly spritzy-textured upfront due to the awakened yeast sediments, but then the overwhelming stale sourness (exactly like that on the nose) dominates the palate coming pretty thin, too, before a light flow of maltiness provides a bit of sweet pleasure; the finish is hard to describe, showing some hints of fruits, lightly toasted malts, some herbs and herbal bitterness of hops Regarding any trace of peat-smokiness? It still escapes my taste buds.
M&D: despite being pretty light-bodied and rather refreshing on the texture, the state of bottle-conditioning is a No-No, failing to show whats promised on the label via either a sound structure or an evolving order. This is the second M&S bottle-conditioned beer that Ive tried, and even less successful than the first (Cropton Yorkshire Bitter). I agree with the previous reviewer (Greencard) that there must be something inconsistent/experimental with the bottle-conditioning process. M&S and Black Isle had better put things right sooner rather than later, lest the whole benign initiative be thrown into disarray!

This is a preliminary review of this beer. It's part of the new range of bottle conditioned UK beers Marks & Spencer is pushing now. However, I'm wondering if the first run of this beer has a few problems. I've tasted two bottles of it now and both have been slightly off (I think). The first one (L7212; BBE: 01.08) seemed to be too tart, sourish, but otherwise OK. The second one (L7248; BBE: 02.08) is not as tart, but was almost completely flat.

I plan to try another one, maybe in a month or so, to do a real review. It's a promising beer by a great brewery. Nice maltiness with a touch of peat and heathery sweet gale. It reminds me a bit of Heather Ale, which is strange because there aren't actually heather flowers in it.