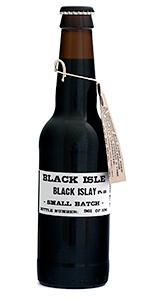 Bought a bottle from the brewery and brought it home from Scotland. Opening it tonight as a "cheers" to our Scottish band Frightened Rabbit playing in our home town on Andrea's birthday.

Still fizzes when opening. Pours dark brown with a big, thick foamy tan head with a surprisingly long retention. Dark in the glass, a deep brown with a hint of red. Smells of cola, wood, whiskey, and malty stout -- nice dark sweet tones without any harshness of smoke or toast.

First impressions: some carmel and malt, but very woody, fibrous -- that aspect reminds me of Westvleteren 12 -- the willingness not to mute the "plant" character with sweetness.

Smooth. Not as rich as you might expect from the smell. More dry and subdued than many big stouts -- "mature" in the sense that it's not candy-like.

Some smokiness on the finish and in the middle.

Overall, it's dry, woody, not too intense for a black stout-looking beer.

I git this bottle a few weeks ago from my beerbuddy Zimbo! Thanks a ton my friend! I love the darker beers...

This is bottle 294 of 484 bottles, not a big batch. Perfect looking in my Struise glass. Pitchblack fluid with a very nice head. Lacing rings in the glass after a few minutes.

Smell is good, not spectacular, some coffee, dark roasted, and some chocolate. Good mouthfeel.

The colour is pitch black; the liquid clear (no visible yeast in the bottle). The finger thick head is compact and pale brown, it sinks slowly leaving some lacing.

The smell is alcoholic yet smooth. Coffee, vanilla, hints of whisky, dried fruits and red berries. It is surprisingly fresh.

The taste is sweet with roasted flavours, mostly coffee and dark chocolate. It soon becomes salty with hints of grilled meats, red berry jam and whisky. Medium body. The aftertaste is dryer with some spicy/peppery notes, very fragile hints of smoke and delicatessen. The finish is rather alcoholic with raw wood-like flavours.

The carbonation is mild, the few small bubbles smooth. The liquid is semi-smooth.

A bit thin and dry, it doesn't give the support the whisky cask flavours need. Still an OK beer.