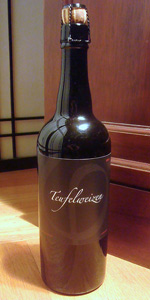 Reviewed by frasergrove from California

Malty, nutty on the nose. Lots of caramelised peanut, walnut, and hazelnut in the mix, touch of marzipan. Light spicy coffee at the back, but could use a bit more of that darkness, all a bit sweet.

Tastes a bit weak and a little drab. Slight roasty but sweet grain upfront, then becomes watered down midway through with notes of spent coffee and a hint of banana at the back. Cocoa, red wine, actually quite boozey as well. Can't say I love it, but there's some nice enough flavours.

Foamy mouthfeel but a bit raw and solventy on the back.

Doesn't really rein itself in and is a little unbalance and extreme. Could have been better.

3.71/5  rDev -2.1%
look: 4 | smell: 3 | taste: 4 | feel: 3.5 | overall: 4
A devilish weizenbock from California. I purchased this from Berkeley Bowl West in Berkeley, CA and brought it back to Australia to share with @tobeerornottobe and @LaitueGonflable.

Pours a deep reddish black colour, with an initially frothy and substantial head of off-white. Lacing is solid, but speckled. Body is surprisingly light for its ABV. But overall, it's a pretty decent looking beer.

Nose is a little heavy, but it has a slight emptiness to it. Or at least, it has something which deflates it a little. It may be the wheat, it may even have a faint touch of acidity to it. It feels slightly too spicy, and without the roundness and deep sweetness that it really requires. I can't say I'm a huge fan.

Taste is a lot better, however. Here, there is a length and depth to the palate which is quite exemplary. There are certainly wheat notes on the front, which give a light roundness and a touch of bite, before the darker notes come through, leading a sluice of blackcurrant, pepper and shiraz through to the back. The wheat still makes it presence felt, with a lightness throughout.

Feel is lighter than expected, but has a slight astringency on the back like a dry cabernet.

Overall, this is decent stuff, and it does some unusual things. It's not entirely successful, but I like that it tries to pull itself in strange new directions. Number 8.

Reviewed by ngeunit1 from Massachusetts

S - Aroma is roasted malts and chocolate, with a touch of coffee and dark fruit with some spicy yeast, banana, wheat, and a touch of smoke.

T - Starts off with some roasted chocolate malts with some dark fruit sweetness, spicy and peppery yeast, and a touch of smoke. Through the middle, some banana and clove flavors come through with a touch of yeast and a bit of coffee. The finish is a mix of roasted and lightly burnt caramel and chocolate malts, spicy and banana yeast flavors, pepper, and a hint of smoke.

D - Very drinkable. A really unique and interesting beer, with the roasted flavors really working nicely with the Weizenbock base.

Reviewed by litheum94 from California

Chocolate flavors with dry malts at first. Caramel sweetness with a slight red pepper burn starts to come one. Spicy towards the finish, with cloves being the predominate flavor.

A very nice offering, especially for the first release from this brewery. Pretty unique take on the style, as I would probably have thought this was more of a Belgian style than a weizenbock in a blind tasting.

Reviewed by FosterJM from California

Thanks to Matt for sharing
Shared at MrHirschybars tasting

App- A darker Weizen that I have seen. A good mix of brown/amber with a small bit of a medium khaki looking head. Left nice lace and cling down my glass.

Smell- After I read the bottle I was just kinda amazed at how much was shoved into this beer. At points it worked, at points it didnt. It was a bit of a cocoa powder with a nice assertive wheat base and then a bit of a molasses/syrup note.

Taste- Taste is very similar to the nose. I really liked the matching flavors in this of the wheat/chocolate and a bit of a pepper spice. Good beer with some big layers working together not seperate. Each layer brought a bit more out of different parts from chocolate and sweet to a little citrus and bitter.

Mouth- A medium bodied beer with some very medium-high carbonation to it. The feel is a bit more full with some good residual cocoa and sweet.

Drink- Matt- Thanks for the tick buddy. Excellent beer. I really liked this one. Different and unqiue and well crafted from a tiny nano up north