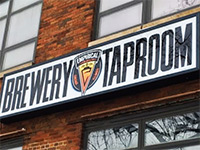 Made a stop here in between Dovetail and Hopleaf.
Minimal spartan warehouse space with brick walls painted white and some local art here and there. Long tables fill the space with a few high tops near the bar. The bar itself sat maybe 12, with 6 seats on either side of a large SRO service area.
Bar top was very nice, made of finished heavy wood beams. There were large groups of people under 30 playing board games and Cards Against Humanity. It was pretty much packed, yet many didn't seem to be drinking. A tamale guy was making the rounds. It was loud.

Selection wise, the variety and quality just wasn't there. They had 2 boards titled "experimental" for one-offs and "production" for year-round. There were 4 cream ales on the experimental side, which didn't sound appealing anytime, let alone in the dead of winter. No big beers, besides a quad which I wasn't feeling. There was a Friday firkin, which was the IPA with 4 types of fruit in it. Sadly it didn't taste like fruit at all. Neither did the passionfruit pale ale. After a few from the Expermental/Production lists, we were done.

Maybe i'm trying the wrong beers, but none of the 5 i've tried were better than mediocre. All bland and watery with no defining character beyond hop bitterness. I'd give them another chance, but i'm not rushing back anytime soon.

Visited 4 pm on a Saturday. Got the last seat at a 15 or so person bar. The space is a high ceiling open warehouse style very minimalist. Lots of standing and sitting spaces. 12 of their own on tap, good spread of styles. Prices started at $5 pints and $7 10 oz for the high gravity stuff. Bartenders were active.

brand new tap room just opened up, although i understand they have been making beer for quite awhile now. its adjacent to the brewery, sharing one wall, and the space is vast. majorly high ceilings, painted brick, and, just a few tables, sparse but comfortable in there. they have done a nice job with minimalist decor, and we felt very welcome in there, cozy even. bar staff was attentive and bright, and they had two series of beers on tap, some basic staple stuff and then a more experimental range. for me, the best beer was the barrel aged porter, hands down. really by far the best i thought, but we tasted through a fair few and really didnt find any weak links in there at all. some better than others of course, but all were well done. i appreciated the wide range of styles, something for everyone in here, and its obvious this place is going to be a hit when word gets out. its been open only very recently. the dudes working in here made it special, and thats always worth a second visit in my book...