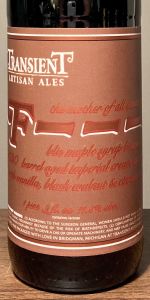 The aroma on this is dominated by the cinnamon. Underlying that are notes of warm spiced cake, chocolate, maple syrup, bourbon, roasted malts, chocolate and vanilla. The resulting aroma is reminiscent of a fresh baked, iced spice cake. I personally would have preferred a bit more balance with the cinnamon on the nose, but I will admit that while the cinnamon is dominant, it does still work and provides a lovely aroma.

Taste follows the nose with the cinnamon taking a dominate role in the flavor profile. However, its a bit less dominant in the flavor profile as the other notes are allowed to come through with a bit more pronouncement. There you get notes of roasted malts, caramel chocolate, vanilla, maple syrup, bourbon, walnuts, and oak. The walnuts kind of surprised me - you really can taste them in this and that contributes to the overall impression of spiced cake that I described on the nose. The barrel presence in this one does somewhat suffer due to the dominance of the cinnamon. Its there, but subtly so.

Feel is medium to full bodied. Not thick, but not thin either - somewhere nicely in the middle. Smooth and creamy with gentle carbonation.

Overall this one does not quite reach the heights attained by its cousin the F--- maple syrup/vanilla variant, but its a very nice beer on its own. Definitely worth drinking if you ever get the chance.

4.5/5  rDev +5.9%
look: 4.5 | smell: 4.5 | taste: 4.5 | feel: 4.5 | overall: 4.5
A perfectly black body on an aggressive pour props up a dark tan head that sizzles a bit and dissipates pretty quickly. The cinnamon and Blis maple barrel aromas literally leap from the bottle (and glass after the pour), and there’s also a nice vanilla note and a nutty aroma as well. Wow, does this smell fantastic.

The Blis maple barrel is really forward, but the cinnamon provides a really nice balance, and the vanilla especially smooths out the finish, with a subtle nutty flavor at the very back of the palate. This beer has a LOT going on.

The mouthfeel is creamy and full, as expected in an imperial cream stout. What a magnificent flavor ride this beer is.

Reviewed by Sammonsd from Michigan

Reviewed by BourbonForBeer from Illinois

Name a better beer? KBBS, nope. Had them both... F--- Walnut/Cinnamon/Vanilla is literally one of the best. (MUST HAVE FRESH)

One of the best beers i've had!

O - This is an awesome variant. Huge cinnamon on the nose and flavor. Super rich and tasty.

Rated by johnnnniee from New Hampshire