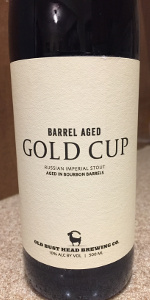 Notes: Named for the golden chalice bestowed on the winner of the Virginia Gold Cup races—an antique cup first granted to horse and rider by Catherine the Great—our Russian Imperial Stout with its black, velvety, opulence is as rich and complex as the Czarina who was a fan of the dark brew. A dark-berry sweetness underlies roasted tones of bittersweet chocolate and espresso coating the mouth with a smooth, lingering, fullness worthy of the cup!
View: Beers | Place Reviews
Reviews: 5 | Ratings: 41 | Log in to view all ratings and sort

Poured fairly hard from a bottle into a snifter glass, giving a few fingers of foamy brown head. Head fades after a bit to heavy lacing. Near black color, opaque. Smell is a light roasted malt. Taste is a little malt at the beginning immediately followed by faily strong roasty flavor with a hint of something like fruit and espresso. Medium bodied with a decent bite from the moderate carbonation. A bit too roasty for my taste, but overall a pretty solid stout.

The beer is a very nice looking dark black color. The smell and taste notes are good. The beer has a nice milk chocolate note with light roasted malt notes and a light hop bitterness in the finish. The carbonation is a bit tingly but still smooth.

Pitch black with a thick cap of light tan head. Big sheets of tight sticky lacing. The aroma is mild roasted malts. The taste is robust roast malts, chocolate, and a little coffee. Smooth and full on the palate.

Decadent dark beer. Very smooth and roasty with hints of chocolate and coffee. Very much up my alley as far as dark beers go and was a nice surprise. It paired well with a bison burger that I ordered from the Marble & Rye restaurant. Definitely recommend this beer. 10% ABV

Had this at NoVa Brewfest non-nitro, nitro on tap for this review:
A: deep brown to black (bar a tad dark). Nitro pour obviously has nice foamy head, can't recall the brewfest pour. Lacing on nitro was decent, filmy coverage on top.

S: nice nutty, roasted malt nose; it's a bit more nutty than I'd expect, but also get a touch of oat, and a bit of woodiness. The description I have indicates espresso, but I don't actually get much of any coffee-like notes.

T/M: very similar to nose. I recall the non-nitro have more bite, which is not surprising. The nitro has more woody tastes, as well as a drying nutty taste (walnut perhaps). There are hints of chocolate, but there's something else there, I'm almost thinking amaretto in nature (there was a strange fleeting tart bite when the beer was colder). The non-nitro feel I recall being a negative in my mind. It wasn't horrible, but just a tad light for a RIS. The nitro adds feel, obviously, but it perhaps exposes a lack of depth that I mis-perceived in the other taste.

O: was impressed enough to grab this twice at brewfest and pay for it (more straight-up) tonight. I haven't been overly impressed with other offerings by the brewery, but this one made me want to keep an eye on them.