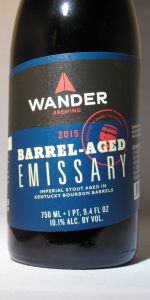 Definitely seems an infection of some type setting in. Thin, fizzy, cherry cola, but ultimately pretty hollow. You don't get much of a base beer or much bourbon barrel - a vague watered down stout with oakiness.

A 2016 bottle that I received from a fellow BA. It's been in the fridge since last year. Poured in a 12oz. snifter for the review.

Look- Pours a thin dark brown producing a giant finger of light brown foam that won't go away. A little lacing left when it settles just a bit.

Feel- Thin and very carbonated with a dry finish.

Overall- Something seems a bit off with this beer. I'm not sure if aging was a factor? It's decent enough, but I'm left looking for more. I usually rate them fresh, but I've rarely been disappointed with barrel aged beers with a little time on them when they're refrigerated. This may be the exception.....

Black color. Two-fingered, creamy tan head that does not want to receed. When the head does collapse it is a nice, thick collar. Aroma is oranges, pineapple and body sweat. Mouthfeel is dry. Taste like a fruit salad. It finishes more bitter than the initial drink. You can taste bourbon. Maybe that is why its sweet. First beer i have ever had from Wander Brewing. Not a bad impression. Willing to try a IPA from them if available.

750mL bottle of the 2016 vintage received as part of a box of (mostly) Whatcom county goodness from beertunes. I have not seen this particular Wander beer turn up locally. The sci-fi geek in me wonders if this is a nod to DS9.

Poured into a Selkirk Abbey glass, for the most part (for WBAYDN purposes, some went into a small stein), this was the color of night, with a two-finger head of a khaki-like hue. Pretty decent lacing and head retention for a beer this strong.

The aromas imparted from the bourbon barrel aging were at the forefront, initially, with oaky, boozy notes wrapped in a thin cloak of vanilla scent. There's a little bit of a bitter, dark fruit aroma present as well. As it warms, some dark malt aromas reminiscent of cocoa come out to play as well.

Initially, the flavor was strongly influenced by the same bourbon barrel elements noted in the nose, although I felt the raisiny, dark fruit flavor noted above stood out a bit more. Weirdly, I also tasted what seemed like red wine notes, like that from an assertively oaky tasting cabernet. If someone told me this was a blend of bourbon and wine barrel aged beers, I'd believe it. As it warms, an alcohol glow can be discerned, and the traditional notes of beers brewed with dark malts make themselves known: bits of cocoa, coffee and even hints of chocolate covered cherries. The barrels lord over all else, however, and remain the stars of the show from first to last.

Lighter in body than I expected, with a thinnish yet sticky mouthfeel for the style.

I can't call this a great beer, but it's nearly there. It's a big, tasty flavorful beer, but not in the front ranks of BBA stouts of my acquaintance, at least not among relatively fresh ones. I don't know this beer's price, but if the same as those of Fremont, I'd probably go that route instead. However, if cheaper, I'd probably grab several of them (FWIW, nobody locally bottles or cans this style, and if this were a local beer I'd probably be all over it). Maybe if laid down for a bit, the barrel flavors might mellow a bit, and let some other elements of the beer shine a bit more. A big shout out to beertunes for the chance to try this beer! Wander strikes me as an adventurous brewery that does really well with a wide array of styles, and he's a lucky BA to be able to be in such close proximity to them.

Tried the 2015 version (meaning it was two years old) with friends. Very wonderful beer. It was ridiculously laden with a smoky, oaky, bourbon flavor: almost like it was half whiskey. But really great, on all accounts. Maybe not mind blowing, but worth the price of admission and the experience.

Dark brown with a big swirl of dark beige foam in the little Chimay chalice. Just a whiff of something like booze. Spritzy and even a little creamy in the mouth. Perfectly drinkable, but hot from alcohol, and not a lot of malt flavor.

Tastes more like a Belgian beer, going very dry. Not very hoppy tasting, just a bitter yeasty edge. This is a very austere sort of barrel matured brew. As much as I like the style, and the Wander Brewery, this is about the least pleasant Bourbon-flavored beer I've had this year.

This is the best thing I've tasted in years. No fancy descriptions necessary (see Liquid Amber's review)
My sister just visited from California and though she isn't a 'beer person' we became a bit obsessed with this stout. Just try it, that's all. Not sure how much longer this run is. The folks at Wander told us that they're about to break into the next batch. Hope it's as good as this one. Unforgettable!

Poured into a Fremont small snifter. Pours nearly pitch black with a fine, half finger light brown head with great retention and lacing. Aroma of toasted dark malt, whiskey and fresh cut pine boards. Flavor bourbon and wood, light to moderate dark toasted malt, grassy hops, hints of dark stone fruit. Finishes with woody bourbon infused grassy hop bitterness. Medium bodied; lighter than expected from such a big imperial stout, but with good carbonation. The barrel flavors dominate this stout. The malt body is unusually light, but with good toasted character. The woodiness is at the fore, and it is nice, fresh cut wood flavor that melds with the bourbon well. Thin for a stout, but substantial enough to support the barrel flavors. A bit boozy and a warming. Despite the light stout body, I liked this quite a bit. The hop finish is quite nice with the wood.