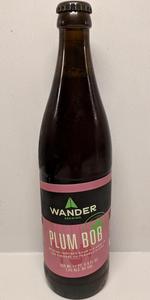 Pour is a murky the colour of papaya flesh... that pinkish orangish of sunsets and the like. Minimal wet white bubbles congregate and ultimately form a white ring with small scattered outcroppings across the rest of the circle. Actually better lacing than I'd expect, as well, with a few hooks and crags left along the glass to trace my rate of consumption.

Nose is gently tart, not particularly sharp, but with an earthiness underneath. There's some spice that's almost like a liqueur, but not alcohol forward at all. I think the spice and earthiness are the contributions of the oak in which it was aged. The more I examine it, the more it feels like it's the wood.
Once it's warmed and sat for a while the nose gives a distinct impression of... like straw? and artists clay/bordering on playdough? dunno.

There's a lot of subtlety to be found here, and I dig it, even if I liked the hidden layers in the nose a little better. It's very rounded off, ultimately. The foundations are tart, but like a tart pyramid with the top cut off... you get the insinuations that direction and the clear foundation, but then it never finds that sharp peak. Instead there's a Frankenstein layer that's plum meat, but it never culminates in neither the sweet nor the tart sharp that plums can carry. Instead the cap is rounded and almost creamy, something I've found in a fair number of cherry sours I've tried as well. The wood is present in similar means as found on the nose, but it is less apparent here on the tongue. The sharpest points in this one are the carbonation which is thick and assertive, helping the lack of peak elsewhere not to be a distraction. Dry finish ultimately and really no hint of alcohol. A final wave of light plumitude serves as the final impression as it sits on the tongue.


Plum Bob from Wander Brewing
Beer rating: 4.06 out of 5 with 1 ratings