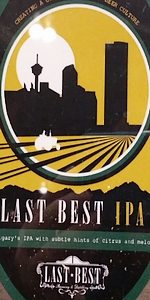 Poured from a 355ml can.
A nice West Coast style IPA super easy drinking with a nice bitter hop finish.
Reminds me of Fat Tug from B.C. Not a session IPA at 6.5

Mellow easy drinking slight bitter hop. Session American ipa with a good look in a glass on the sunny deck. Enjoyed this beverage very much. Thanks Last Best

Draft pint while enjoying the patio at Limerick's in Calgary.
This beer looks slightly hazy, dark golden orange color, thin cream colored head. Foam leaves some sticky lace, lasts through entire glass.
It smells of typical IPA, citrus, pine, leafy hops.
The taste has a nice bitter punch, pine, grapefruit bitterness, balanced by some caramel malt. Earthy hop finish.
The carbonation low enough that it isn't fizzy, but still keeps it refreshing and prickly on the tongue. Medium body, dry finish.
A good drinking hop filled beer.
I must get to the brew pub to try more from Last Best.

A murky dark orange that almost looks like juice, top filled glass but even the thin film manages to leave 6 pencil thin rings followed by a couple random patches

T lemon rind and more pine and rind the the nose, not the tropical fruit blast on the nose but still solid

M has a bitter bite, a little gritty, creams up from the bubbles and heavy rind on the finish just keeps going

O not a bad IPA at all, nice and fresh of a tap and although there's a little room for improvement its a great start

not a bad intro to the new guys in town, I'll be looking for more offerings from these guys for sure

Not terribly hoppy, but a really smooth and well balanced citrus IPA. I've ordered it at multiple places in Calgary and have never been disappointed. You'll have trouble finding a better Western Canadian IPA.

Smooth tasting IPA. Pleasant hoppy citrus smell but doesn't have the bitterness of a prime IPA. Might appeal to the non IPA lovers out there. Throw a few more hops in kettle, buckaroos.

On tap at National on 10th in Cowtown.

Appearance - Pours an amber copper with a finger of creamy white head.

Taste - Citrus hops followed by the sweetness from the caramalts and pine resin.

Mouthfeel - Medium bodied with light to moderate carbonation. Finishes with a lingering bitterness from the citrus hops and pine resin.

Overall - I have finally gotten around to trying an offering from the latest Calgary brewery. Last Best delivers an IPA with a good citrus hop profile but I was hoping for more of the hops in the aroma. Some minor tweaks will make this one a stand-out. Otherwise, a pleasant IPA by a newcomer to the craft beer scene.

This beer appears a slightly hazy, dark bronzed amber hue, with one flabby finger of puffy, densely foamy, and somewhat creamy off-white head, which leaves some fuzzy painted snow rime lace around the glass as things bleed away.

The carbonation is fairly easygoing, just a timid frothiness throughout, the body a solid medium weight, and generally smooth, especially given the nature of the style. It finishes barely off-dry, the muddled citrus and forest flora hoppiness lording over the waning, and mostly dry malt.

A nice, hop-dominated IPA, even if the hops are not as peppy or astringent as one (i.e. moi) would like. Reminiscent of another southern Alberta brewpub's offering for the style, which speaks more to a perception of the target market around here, than yer average beer geek's predilections.