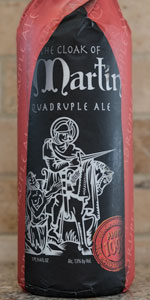 Pours very dark ruby red, and is clear with no head. This appears to be almost flat, leaving a thick film on the Chimay chalice with each swirl.

Aromas are clean with cherry and fig alcohol. Middle to end are sweet raisins and newly tanned leather.

Sweetness and bitterness are modest and balanced, followed by slight sourness. Acidity is high and it is similar to Chianti with pepper and celery notes. The middle is filled with plums, sour cherries and earthiness. This experience is more wine-like than beer-like. The finish is long, dry and alcoholic with strong, fruity tones. Warmth makes the cherries more prominent.

Essentially flat, faint carbonation is only noticeable immediately upon entry. The body is dense with a soft, smooth texture. Alcohol is high, lightly warming, and slightly metallic.

This would pair well with deep philosophical conversation as it warms very much like red wine. I enjoyed it on a cool, sunny summer day and imagine a mild cigar could stand up in accompaniment.

Appearance – As soon as the beer hit the glass I could tell that this was a complete failure of a beer. Obviously the brewery had some major problem with the yeast strain but continued to distributed the beer. The coloring is nice but the absolute absence of any type of carbonation indicates a major brewing/bottling problem.

Smell – The candied sugar and bread malts sadly indicate that this one had a lot of potential.

Mouthfeel – Thin as can be with zero effervescence.

Drinkability – This has to be the first 13% ABV ale that I’ve poured down the sink but they had no business bringing this to market.

Comments – I typically don’t post reviews of skunked beers or ones with obvious product problems like this one, but the ale continues to be sold and is quite expensive so people need to know to be on the look out.

Quads are one of my most favorite kind of beer, and this bottle frankly butchered it. While the smell was that of a quad, I immediately noticed that it appeared flat. I thought I had gotten a bad bottle, until I read other reviews here. There is almost no carbonation to this "beer". It boasts a mediocre taste and an awful syrup mouthfeel. If I were this brewery I would be ashamed of this brew, they might as well have made a flavorful Nyquil. If you are looking for a good quad, look elsewhere, if you are looking for a good beer.... look elsewhere.

-dark with little to no head
- has a tart fruit smell almost that of wine
-taste is same as the smell to much of a wine flavor not enough of the quad at all...
-slightly oily but apart from that very carbonated
-was hoping for alot more, didnt get the quad taste much at all more close to a american wild..

Appearance: Deep brown with no head.

Aroma: Dark fruit character of raisons, dates and cherries with a touch of acidity and a hint of leather.

Little to no head with little to no carbonation (did I get a bad bottle?)

Appearance- Deep chocolate with dark ruby highlights. No head, little to no carbonation, even with swirling the glass.

Taste- Sickeningly sweet up front, in the middle, and in the end. Heavy, almost soy sauce malt flavor. Low to moderate bitterness. No truly off flavors but the sweetness makes it difficult to taste anything else.

Overall- Maybe I got a bad bottle that failed to condition. That would certainly explain the sweetness and lack of carbonation. You'd think with what I paid for it, and the Belgian bottle, the shipping from Belgium, and the fancy paper wrapping, they would pay more attention to the actual quality of the beer. I'm a huge fan of the Belgian Quad aka Belgian Dark Strong beer but this is just awful.

I poured this into a Belgian goblet. Bottled in June 2012.

The Cloak of St. Martin pours a deep, rich, and cloudy ruby-brown color with little to no head. There is a thin ring of bubbles at the edge of the glass, but that is all. Quite disappointing, as I expect a Belgian ale that is bottle conditioned to have a good amount of carbonation. This seems to have none, and it makes the beers look lifeless.

I try allowing the beer to come to room temperature to bring out more of the aroma. Hints of black currants, raisins, wine, and caramel. It does offer a rich aroma, filled with those darker malt qualities, though there is nothing about the aroma that makes it extraordinary. No hops, and seems to be on par for the style.

The taste is decent. Some of the same characteristics as the aroma, like red wine and currants, and a certain sweetness across the palate. The mid-sip sweetness had more of that raisin/currant quality. Slight heat of alcohol is there in the finish, replacing any bitterness on the back end.

The carbonation is definitely off for this style of beer. I know that higher alcohol beers often have a difficult time maintaining much head, and this beer does clock in at a respectable 13% abv, but I expect more out of Belgian yeast. Very weak on carbonation, which doesn't help the already full-bodied beer. Heat on the finish.

I was honestly hoping for better. It's an expensive bottle and this, I felt, was lacking in many ways. I don't think the age had much to do with it, as bottle conditioned beer should improve with age if anything. I feel like its just a sloppy quad.

750ml into a tulip. Pours a slick deep walnut cola, garnet when back lit, nearly zero head, no lacing.

Aroma is of a strong vinous quality, grape Hi-C and the ooze from the bottom of a crate of dark plums that have softened. nice

Dark fruits nicely dominate the initial sensation. Pleasant skin rind bitter aftertaste till tomorrow. Cherries and oak come forward at the last moment. Relatively thin bodied lifeless mouthfeel. While the alcohol is not solvent the intensity of the flavor belies its size. Leans towards being a barleywine. The second pour which included the dregs tasted noticeably different to its betterment. Needs warmth to shine, complex.
cheers
jd

The Cloak Of St Martin from Brasserie De Brunehaut
Beer rating: 87 out of 100 with 33 ratings