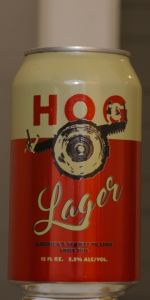 From the CAN: "America's Sexiest Pilsner since 2016"; "We get our name from the heritage breed Berkshire Black Hog, who are black in appearance and always delicious."; "Black Hog Brewing Co. works with local farmers who grow some of our ingredients and feed their pigs with our spent grains. At the completion of another year full of beer, the famers donate a hog for roasting. which is why our rally cry is #DRINKTOTHEHOG"; "Cheers! Tyler, Tom and Jason"; "You best 'cycle"; "Made in CT".

Once aCAN, following the Crack! of the vent, I found myself CANpelled to go with the Barista Glug! I have a nice, tall Pilsner glass & I like the visual of a C-Line Glug from on high. For one thing, it led to the formation of a massive three-plus fingers of dense, foamy, rocky, bone-white head with phenomenal retention. For CANother, I just dig the way that it looks once the glass fills & the head sits there like something out of a 1950s sports CANmercial. Color was a gorgeous Yellow-Gold (SRM = 4 - 5) with NE-quality clarity, prompting an impromptu visit from The Gelt Gang of Croesus, Mammon & Midas, all clamoring for a taste! Nose was kind of odd for the style with a vinous quality as opposed to the usual grassy-hay. Hmm. Mouthfeel was solidly medium, on the big side for a Lager of any stripe. The taste followed the nose in that in addition to the usual biscuit/freshly-mown grass/drying hay flavors, there was also a bit of a grape-y vinousness. Hmm. All of this led to a veddy dry finish. Frankly, I was all for it! I will take bone-dry, as this was, over sweet or semi-sweet every day of the week. I CAN see having this again, especially out of my cooler at the beach this Summer. YMMV.

Notes via stream of consciousness: Ahhh, a nice hazy Pilsner, just what I like. NOT! Pilsner should always be clear. There's a such thing as Kellerpils, but this is simply labeled Pilsner. The inch-plus of white foam has alread dropped atop its hazy golden body at this point but at least there's some lacing left behind where it once stood. The aroma is not surprisingly a little yeasty. Again, that's never OK. There's some nice grainy malt in there as well, but not a lot of hops. What's there seems a bit floral so I'll assume they were going more for a Czech Pilsener, but there's also some grassiness and gooseberry (which I unfortunately don't personally like very much). It's weird. Whatever, I can live with the gooseberry but not the yeast, although maybe they're just doing their own thing. On to the flavor, well not much has changed. The yeast remains, along with the grainy & bready malt, the weird white wine note, and a dusting of floral hops. It's not that bitter at all, and this "Pilsner" just falls apart at that point. The wheels have fallen off and the jalopy is on fire. If this was intended as a representation of a European Pilsner-style beer it's a dismal failure. If they're just doing their own thing and decided to go beyond the term lager, and add the term Pilsner to the smaller text of the label that's kind of OK too. Let me read that because I haven't yet... no, it's just says "America's sexiest Pilsner". Bad marketing but nothing more. Alright, let me wrap this up. It's medium bodied and gently crisp in the mouth, and now back to the beer in general. I've often found beers that didn't represent a style, and maybe even grossly misrepresented a style, but in which I found some redeeming quality. Whole Hog's "Cuppa Espresso Stout", for example, doesn't have enough coffee character in my opinion to be called a coffee beer but it's got a great yeasty fruitiness to it, and is overall quite pleasant and enjoyable. This beer, however, is just a sloppy mess. The yeast doesn't help it, it hinders it, at least for me although I'll admit to being more sensitive to yeast than most people. The lack of bitterness leaves it unbalanced, and the weird Sauvignon Blanc / gooseberry note is very odd. When I put those things together it's just a disaster. I could drink the rest of this but I won't, although that doesn't say much for it. For some reason I thought Black Hog produced better beers but I may have to rethink that after this one. Not recommended.
Review # 6,715

Rated by Fitzy01 from Maine

Rated by sdeem from Washington

S: grass and grain; a bit of spice;

T: follows the nose, although the grainy sweetness is more pronounced in the flavor; long moderately bitter aftertaste;

O: enjoyable, but not something I would seek out;