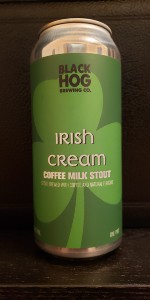 A: The beer is jet black in color. It poured with a quarter finger high tan head that left a thin collar around the edge and lots of lacing down the sides of the glass.
S: Moderate aromas of Irish Cream are present in the nose along with notes of coffee.
T: The taste follows the smell but has stronger flavors of coffee and a light to moderate amount of bitterness.
M: It feels medium-bodied on the palate and has a moderate amount of carbonation.
O: This beer isn't as smooth and creamy as other milk stouts but is very easy to drink.

T: up front, it's balanced between deeply roasted grain, coffee, cream, and bittersweet chocolate; from the middle through the finish, it's coffee and cream;

Nose has a bit of an artificial aroma but it's super Irish Cream, milk and lactose, lots of milk chocolate, cocoa, a bit of coffee and roast fair amount of Irish cream in coffee character

Taste is more of the same, but chocolate out front, rich cocoa and creamy milk chocolate, lactose and milk, milk sugar, with more of the Irish cream flavor, not as much as the nose, then coffee, some mild roasted coffee and a bit of roasted malt, med bitterness throughout especially on the med-dry finish

Overall very gimmicky, at least there is some resemblance of a milk stout, but otherwise it's basically Irish cream with lots of chocolate and some coffee, and bitterness that clashes a bit

Pours a dark brown color with over a finger of fluffy beige head. The nose definitely smells like Irish Coffee. The Irish Coffee essence translates to the flavor profile. However, there's not much else interesting to taste here. The finish has a touch of roasted bitterness. The body is thin even for the style.

A- Black brew from the 16oz can into a snifter. A foamy layer ascends to half a finger high with a frothy consistency and halfway decent retention. Bubbly ring around the edges leaves solid legs and lacing forms with a few long webs.

S- Irish Cream coffee definitely comes to mind with coffee notes as well as that distinct aroma reminiscent of Bailey's with whiskey, cream and chocolate notes. Coffee is pretty strong and there are nutty, toasty and roast hints. A tad blunt but mostly balanced.

T- The flavoring becomes a bit more obvious here but the base coffee milk stout is plenty solid with roast barley, chocolate, toasted nuts, caramel and licorice notes. Roasty bitterness as well as strong coffee beans and the intense Irish Cream flavoring, which really comes out with time and some warming.

MF- On the lighter side with some frothy and slightly creamy texture. The carbonation is moderately high and the brew is slightly slick. A tad on the thin side.

The coffee usage is really good in both the aroma and its translation onto the taste buds. The Irish Cream aroma blends in with the base brew nicely but the flavor is a bit abrasive when all is said and done. A touch thin too.

Black Hog tends to make some rather interesting stuff, and, even though they're not always extremely high-quality, I do like to give their beers a shot now and then because I have been surprised on more than one occasion. Enter their newly-released Irish Cream stout, based on their original Coffee Milk Stout. The website says that the difference is that this has a "hint of Irish cream," which seems... odd. I mean, did they literally put Irish cream in here? Sounds illegal, probably. I assume it is just some flavor wizardry, or perhaps it won't really matter. Let's find out.

The pour is a deep, dark brown color with very slight clarity/translucence around the edges, and the body itself carries a solid ring of light khaki-colored foam that leaves behind a very consistent sheet of lacing. Pretty impressive appearance overall, with some decent legs, to boot. Re-rousing the head leads to it assuming a slightly-darker color, but not much different than the original.

The nose is definitely somewhat Irish cream-influenced. I pick up some whiskey (even though this wasn't aged in those barrels) and almond or some other nuttiness, along with English toffee, roasted coffee beans, light notes of dark chocolate, and toasted bread crusts. Husky dark grains and more milky-sweetness collide, giving off a surprisingly nice and well-rounded sweet stout scent. Honestly does actually remind me of Irish coffee. Good show.

The flavor is along the same lines with a lot of roasted malts, toasted brown bread, coffee, light earthy spice, and a creamy, slightly-sweet lactose addition taking up the rear, toward the finish. The dedication to flavoring this has is actually very impressive to me. I'm not sure how they did it, but it does taste like what they set out to make it taste like. It's also quite different from their normal Coffee Milk Stout (and not only due to the prickly mouthfeel, which is quite different from the nitro pour present in the original), with more prominent adjunct flavors. Despite the wide array of dark flavors here, however, it's not tough to drink. It's actually kinda refreshing, in a milk stout type of way, anyway. I'd drink it again if I were in the mood for a flavored lower ABV stout. Give it a try!