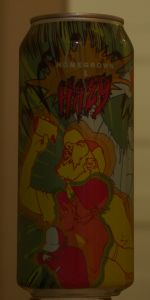 Notes: This NEIPA uses the best that Connecticut has to offer in malt and CT-grown Cascade and Cashmere hops to make a hazy IPA that is super soft and bursting with citrus and orange sorbet.
View: More Beers | Place Reviews
Recent ratings and reviews.

The CANQuest (tm)'s backlog is getting to be like that pesky loose thread on a knit sweater. You know how it goes, pull on it & all of a sudden, everything unravels & you are left with a ball of yarn that used to be a sweater! I had a Black Hog Pilsner a little bit ago, then thought, "Hmm, I think that I've got a few more from Black Hog. Lemme see. What? I could have sworn that I already reviewed THAT one!". OMFG. Now, I've got an impromptu brewery horizontal on my hands!

From the CAN: "NEIPA style India Pale Ale"; "CT Grown: Cascade, Cashmere"; "You best 'cycle"; "Made in CT"; "We get our name from the heritage breed Berkshire Black Hog, who are black in appearance and always delicious."; "Black Hog Brewing Co. works with local farmers who grow some of our ingredients and feed their pigs with our spent grains. At the completion of another year full of beer, the famers donate a hog for roasting. which is why our rally cry is #DRINKTOTHEHOG"; "Cheers! Tyler, Tom and Jason".

I did not hesitate with this one, following the Crack! of the vent. It was an immediate off to the races with a Barista C-Line Glug, bring death from above in the form of a solid stream that saw the quick formation of two-plus fingers of dense, foamy, rocky, eggshell-white head with very good retention, leaving behind nice lacing as it fell. Color was a cloudy Yellow-Gold (SRM = 4 - 5). Nose was filled with tropical fruit, but at the same time, it had an earthiness, like it might have been wet-hopped. I know that they were saying that it was homegrown, but was it THAT close to home? It's possible, although not probable. I was intrigued by the prospect, though. It also led to it striking a single note - there was not a lot of depth to its flavor as a result. The Cascade did not bring its usual Ooomph!, possibly due to an unfamiliar growing environment. Cashmere did all right, but it just never morphed into anything memorable. Finish was semi-dry & while satisfactory, I was left unfulfilled. YMMV.

Homegrown & Hazy from Black Hog Brewing Co.
Beer rating: 3.84 out of 5 with 1 ratings