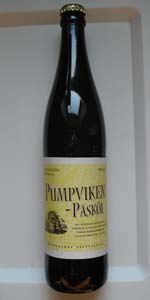 Pours a dark reddish brown with fine but sturdy foam.

Smell is malty with notes of butterscotch and some floral hops. A bit of sweetness ties it together.

Taste starts with some bready sweetness and wortbread, and adds some floral hops and a mild, balanced bitterness. Really good beer to pair with fat foods.

Overall, a classic for Easter, well balanced and goes great with food.

Pours clear, dark copper with a one finger, beige head.

This Easterstyle beer is the most unlike beer of the brewery. Nynäs uses steam when boiled but im not sure how much it really feels in this one compared to the Bedarö Bitter. The raisin tones and the sense of nougat is pushed back abit when served to cold (bellow 13c). My recommendation is to let the beer stretch out over time in the glass so you get more punch in the end. All in all, i must say that the taste is quite good but if your looking for a more traditional taste alá Nynäs i wouldnt go for this. Try the stout instead =)

A 50 cl long-necked brown bottle with a typical "Nynäs-label", yellow with writing in black. A picture of a hand-pump by the sea.

A: The pour is dark amber - copper. The medium-sized head is off-white and very compact and even. Slow dissipation leads to great lacings.

T: Bitter hops up front, and then there's a faint wheat-sensation going on. Light roasted sweet caramell malt. Floral hops gives it a fruity taste as well as flowery. Spices.

D: This is a nice beer - just what you should expect from Nynäshamn. Well-crafted.

A clear amber brew with a coppertone, the head is beige and leaves lots of lacing.

The smell is mostly from the malt, caramel and roasted with a hint of burned bread crust.

An upfront sweetness, toffee and dark syrup, followed by some sourness, Seville oranges, and then the burned crust bitterness.

The beer is medium carbonated, but rather soft and a warm bitter aftertaste. Somewhat oily.

The beer is well balanced, complements the Easter smörgåsbord well. One of the better Swedish Easter ales.

A: Dark brown with reddish hues, slightly hazy. A small beige head that dissipates rather quickly.

T: A fairly stable malty backbone. Brown sugar, toffee, rye bread. Herbs. Earthy and grassy hop flavors. Some fruity flavors as well, but they are rather restrained. In the finish there is a bitterness that lasts longer than expected, some nuts and hop residuals.

M: Medium body and a rather high level of carbonation.

D: A fairly good beer that I enjoyed quite a lot. Easy to drink and very refreshing. Nothing fantastic, though. Would probably fit nicely with a sturdy dinner.

Medium beige head, brown/reddish colour. Head is very creamy. Smell is malty and spicy, it is also sweet and there is not much hops present. There is also smell of yeast almost like a belgian pale ale. Flavour is malty and spicy and with a nice bitter finish. Mouthfeel is average low carbonation and the liquid is a bit sticky.

Hmm, to start with this one reminds me too much of their Christmas beer, feels a bit suspicious.

Looks quite nice tough, a deeb amber color with a nice and big beige foam.

In the taste the spicy feeling takes the overhand. The rosted malts and hops aren't enough to balance all the spices in my opinion.

Nynäshamn is a great brewery though, but this is not one of their best ones.

Pours a clear red-brown, with a 2 cm dark tan head.

The mouthfeel is slick with medium carbonation.

This has become a classic when it comes to easterbeers. Let's see how this years vintage holds up!

A: Dark, dark, red with a small beige lace.

M: Refreshing with a nice bitterness at the end.

I like this beer but it could use some aging to mature. Very drinkable right now but a bit thin. Give it a go!

First thing: this may well be a herbed/spiced beer rather than an English strong ale. Sure it´s an ale, but it´s the vernal equivalent to Nynäshamn´s other masterpiece, Mysingen, which is classified as a herbed/spiced beer. The brewer states that it´s a "Strong Mild Ale".

A: A beautiful dark amber, going on reddish-brown. Creamy, thick head that leaves plenty of lacing.

T: Initially nice n´ sweet, but then the hops kick in. Subtly. It´s malty, bready and very smooth. The brewer´s note about a dry bitter aftertaste is spot on, but it´s of the more pleasant kind.

M: One sip and you feel like you´re stuffing yourself, like you got greedy with a slice of your favorite pie. The alcohol is lurking somewhere, but for all I care they could have opted for Double Bock strength here. Why not?

Drinkability: This is one delicious bottle of suds. It reminds me of good winter holiday boosters (did I mention Mysingen?) and N. American pumpkin beers.

The colour is dark wine red, the liquid is clear. The two finger beige head is airy, it leaves some lacing.

The smell got notes of minerals, earthy roasted dry malt and cocoa.

The carbonation is mild; the beer is smooth.

Seasonal beers are becoming quite a treat in Sweden since the establishment of a handful of good indepoendent brewers on the market. Christmas and Easter are the best times. Pumpvikens påsköl (Pump Bay Easter Ale) 2007 poured in a nice dark brown color, almost grimy, but not with much foam. The smell was rather disappointing, metallic and grainy. The taste was dominated by the strong notes of coffee and chocolate. There was an initial shot of sweet toffee and a bitter aftertaste too. Actually it was nothing like the usual Easter ales but edging more into the stout style. Once I accepted that I did enjoy it.

Deep brown in colour, with little lasting head. Sugary sherbert aroma, with a hint of brown sugar aswell. Hints of sweetness at the start, with a gingery, spicy hop finish, it was OK, but i guess its not my style of beer, too much sugary sweet flavours and a relatively light body, but not totally bad, from quite a surprising little brewer from Sweden.

The pour an attractive vague cherry red with a modest and frothy head, the lace is a fine thin covering sheet. The aroma of over ripe plums, sweet and nutlike tones also present, quite pleasant and the start ambrosial. Top is skinny in feel, the finish minimally acidic, with a personable hop presence, dry and lightly sweet aftertaste, quite drinkable.