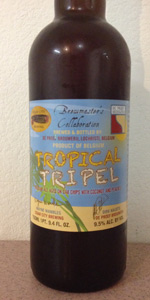 The peaches have really faded. The coconut still shows. Not a typical tripel. Abv shows. Some spices and bananas. Probably past its prime.

Reviewed by cosmicevan from New York

3.08/5  rDev -19.6%
look: 3.25 | smell: 3.25 | taste: 3 | feel: 3 | overall: 3
And the cellar cleaning...continues...this is bottle number 3. As someone who.doesnt like coconut I dont know why I have this, but I have had it for a while. At this point fairly syrupy and syrupy triple dominates the taste. Peaches you say?....sure...I guess so. Coconut you say?...yeah I guess I get some coconut, nothing is really overpowering beyond the fact that this is a triple from 2013(?) and as such has really become rich thick and syrupy. Never had it fresh so can't say what time has really done to it. It isn't bad enough that I couldn't finish the bottle if I wanted but why. Kinda like pina colada I suppose...
Feb 24, 2018
Rated: 3.57 by BMart from Pennsylvania

Rated by B-Finnegan from Pennsylvania

3.75/5  rDev -2.1%
look: 3.75 | smell: 3.75 | taste: 3.75 | feel: 3.75 | overall: 3.75
crazy this cigar city collaboration was still sitting on a shelf down in colorado springs, covered in dust, nice find! decent beer too, although i suspect its changed a bit, coconut and peach as the additives, solid basic tripel at its base. its really sweet from the peaches, sweeter than the normal style, which i already often find sugary. lovely in the glass though, with a tall white head, lasts the whole drink. the peach flavor has faded a lot i assume, but the sweetness is still there, less flattering like that. the coconut is still there though, more earthy and nutty than sweet and milky, which is a nice contrast and steers the tripel in a cool new direction. wheat is the grain i taste the most of, and the yeast is ad weird as it always is from these guys. its belgian, but theres a lot more going on than just that, some mild spice goes with the peach, and the fruitiness is also compatible. neat beer, but a bottle to share if you still have one due to the sweet and the heat, the booze does show through a little bit. cool to see coconut it a light colored beer, let alone a belgian one, very uncommon, but it fits super well. i dug this quite a bit, but wished it were drier.
Feb 08, 2015
Rated: 3.46 by diamondlie from Connecticut