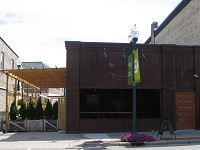 On a 1-day, 4-stops pub crawl, this was the first stop so that we could try the beers and get something to eat before the visits to the other places. The pub is located in a storefront setting the quaint downtown of this small community. A beer garden is located to one side of the building along a sidewalk that leads to a city parking lot at the rear of the building. The interior of the pub has great vibe, but it was a nice day so we sat in the beer garden.

Sampler flights are not offered here, although a free 2 oz. taster is available for the asking. The brewery had only 4 of their beers on tap, plus 6 beers and one cider from other craft breweries. We chose three of Tripelroot's beers to go along with our food order - a session IPA, an amber ale and a black IPA. Two of the beers have some flaws so that we rated them overall with a C minus grade. The amber had a strange flavor that we could not identify and was not drinkable, and the black IPA should have been called a stout by the brewery because the roastiness nearly masks the hops, although it is a tasty 'stout.' The session IPA was the best of the three, and it was graded a C plus.

Fortunately the food is better here than the beers. Stone-ground pizzas are the basis of the menu, although there are soups and salads available too. We each enjoyed what we ordered. This brewery has been open for 6 months now, so they may still be tweaking their beer recipes, at least I hope so. But that amber ale should be taken off the menu until they work things out. This is a nice setting as far as the vibe and the food are concerned, and I hope to beer follows suit soon.