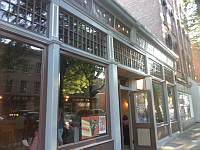 3.88/5  rDev -2%
vibe: 3.75 | quality: 3.5 | service: 4.5 | selection: 3.75
Went on a Wednesday afternoon and hit happy hour and had a good time. Some people were chilling and they had good music (I won't hold Troy's terrible street grid and lack of parking against place) and the bartender was a little familiar w/ the VA brewing scene so had a great chat. The beers I had were so-so and they only had six on tap so actual beerwise I can't say that this place stood out but if you're in the area it's worth checking out.
Oct 26, 2016
Rated: 4.04 by klanzit from Vermont

Rated by Bluetree from New York

Reviewed by vonnegut21 from New York

cool atmosphere. new facade on an older storefront in downtown Troy, the interior is modern clean woodwork. convex bar, with taps on right and left, and the fermenting tanks behind the bar in full view. a couple of low coffee tables and chairs besides the barstools.

they only had two of their beers on tap, plus a nonalcoholic ginger beer. they got wiped out by their grand opening, and an issue with their system. so they filled out the taps with a couple of guest beers, and a local hard cider.

bartenders were nice and friendly, I believe the owners. beers were $6 for a standard tulip glass.