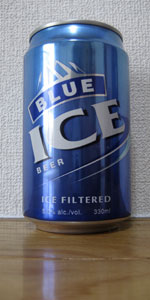 Rated by Haman94 from Japan

Reviewed by samparkique4 from England

1.99/5  rDev -13.9%
look: 2.5 | smell: 1 | taste: 1 | feel: 2 | overall: 5
Another beautiful CAN courtesy of local, in-person trader, tone77, who was nice enough to think of me while on a far out Far East trip recently. Man, I totally dig San Magoo goo beers, or Sammy Googoo, depending, having done some crazy stuff in the P.I. while in Uncle Sugar's Canoe Club. Bring on the peso dancer! I've stacked up some pesos on the spent CAN.

From the CAN: "Ice Filtered"; "Blue Ice Beer"; "All-Aluminum CAN"; "Enjoy Responsibly".

The lid on this baby was more heavy-duty than many on The CANQuest (TM) and I really had to bear down to make the Crack occur! I like when I have to work for my beer. It keeps me a) honest and b) on my toes. The inverted Glug netted a brief finger of foamy, bone-white head with limited retention. Bye! Color was a deep-sunshine yellow, but not deep enough to qualify as golden. My main man in such matters, King Midas, was sitting across the kitchen counter from me and he nodded his head in assent. I dig hanging out with the king since he learned a hard lesson with his dottir, but when those Croesus and Mammon cats show up, it's a friggin' free-for-all with everybody going for my beer. I CAN't abide that, man. Speaking of things that I CANnot abide, the nose smelled like Minhas Eastern division, man. Oh, holy flying f**k, man, this smelled like pink bubble gum, plastics factory and dry cleaning plant all rolled into one crappy little ball. I hear the tromp of Cybermen boots, but they are speaking Chinese! Man, if they have taken China, then we are all done for. My liver began to flutter and I was reminded of what Ron Barchet of Victory B.C. told me on Friday night - "So much beer, so little liver." My response was, "No, man. I've got several in storage from door-to door salesmen who CANnot read. My hangup is the usual two, time and money." I may need to break one out after this gem. Mouthfeel was thin and watery but it was the taste that was really putting my gag reflex to the test. Jeez-O, man, it tasted like they ran corn silage through the dry cleaning plant. I CANnot adequately describe just how awful this swill actually was. It is almost too late as the Cyberleader just burst through the door. I raised my glass to him in a toast to show my ongoing allegiance and he nodded for me to CANtinue drinking. Suddenly, a pleasant warmth came over me as my body slowly became coated in aluminum. What an ironic end, for someone so invested in aluminum CANs to become an aluminum cyborg! Finish was wonderful. This was one of the best beers that I have ever CANsumed. I must finish up, though, as my brethren await me on the other side of what remains of my backyard fence. Do not be alarmed, we mean you no harm ...

Reviewed by Mdog from Minnesota

Smell: Not much, a hint of sulfur.

Taste: Watery, not much happening. A little corn does show up on the finish.

Another can from Hong Kong. Blue Ice could have been a lot worse, I expected a horrible tasting brew but there really wasn't much there. Just another generic lager.

Reviewed by Echosolace from Florida

1.85/5  rDev -19.9%
look: 1.5 | smell: 1.5 | taste: 2 | feel: 2 | overall: 2
A: After peeling of the top of this can (yeah, peel top, like a can of soup), I immediately had worries strewn about. I poured it and then was reminded of a jacuzzi. The head steadily rose for a while, then dissipated all in one go. It is quite clear, and suds are pouring out from every edge of the glass. Unusually sudsy. I wonder if the color was injected, because everything else seems synthetic so far.

S: Ah, I'm not the one to ask. My friend says it smells like a tramp's breath, but I've had one too many of other sorts. Sounds like a regular cheap Pilsner to me.

T: Sweetness touches my tongue first off, but hops, or any sense of malt are non-existent. Sugary grains is how I would describe it, but more towards the sugary side. Like a pastel version of sugary wheat.

M: It's not shabby. The amount of carbonation, after settling a bit isn't too bad. Don't expect anything grand though, we're talking about a shit beer here.

D: Don't waste the time on this beer. Why do they even advertise "Ice Filtered" on the front? I don't know. But compared to bottom feeders, I guess there could be worse... maybe...

Reviewed by ATLbeerDog from Georgia

Reviewed by soulgrowl from England

Smell: This smells like sewage, and I'm not just trying to be theatrical here. That's literally what it smells like. Other nuances: cooked rice and sulfuric, vegetal cornbread. Ugh.

Taste: Sweet and sugary. Corny. Vaguely alcoholic. Judging by the smell, I expected this to be nauseating, but it's actually just very, very bland and unpleasant.

Mouthfeel: Fine. Effervescent, prickly. Carbonation is so sharp it's almost uncomfortable, but it does a good job of distracting from the taste.

Drinkability: I don't know if I can finish this. Avoid, avoid, avoid.