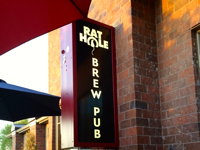 I don't want to do this, but I feel I have to since I actually found bad beer in Bend. I visited 14 breweries in 4 days, and the only beers I found to be even somewhat disagreeable were here. Atmosphere is nice and clean, but a very sterile space in a new office development up the hill from the Old Mill district. Decent view out the windows towards the Deschutes River and the mountain peaks beyond. A warning sign may have been that there were four guest taps to counter the six house brews. I tried a sampler of four--IPA, porter, red, and lemon wheat. All four were deeply flawed--very similar malt base with husky bitterness, noisy hop profiles, fairly hot alcohol finishes. A 7.5% lemon wheat ale? What the hell is that? On the plus side, our server was efficient and the sampler was only five bucks. Hopefully they'll sort our what's going on in the brewhouse soon.

My wife and I were traveling through Bend to do some camping, and intended to stop to eat at Crux Fermentation Project. They were insanely busy, so we looked for another brewery in the area. I had previously looked at Rat Hole's menu and thought it looked fun; since it was nearby, we decided to give it a shot.

The location is nice and was very clean. It was self-seating (a big pet peeve of mine) but they at least were not very busy, so the seating was easy. Our server was friendly, had tons of recommendations, and was generally quite fast. My wife ordered a flight of beers, and I got a draft pint of the Honey Pale Ale.

The beers were fine but not great. This is not particularly bad, considering the wealth of breweries and beers in Oregon. The Honey Pale Ale had an odd quirk, though- the flavors became less intense as the beer warmed up. This goes against everything I know about beer, and seems even odder as they refer to this as a British style. My wife had an assortment of beers in her flight, including the Haystack Hazelnut and the Imperial Stout. Again, these were fine but not very noteworthy. I'd be willing to give several of them another try in a larger serving; we may have missed some of the nuance with the smaller pours.

The food was great. Rat Hole strives for a Southwestern feel in their food, and they succeeded with the dishes we ordered. My wife had the Mushroom Quesadilla, which was cheesy and rich and loaded with tasty mushrooms. I had the Southwestern Nachos with chicken. The menu claims the nachos are a large portion, and they were not joking. I could barely get through the meal, and I was deliberately a large meal in preparation for a hard climb the next day. The flavors were top notch in the nachos, with great cheese and beans and such. We also had them bring out three hot sauces, all which I believe they made on premises. Each was good and different, if not as spicy as I'd like.

Overall, a fun brewpub worth checking out if you are in the area.

We went to Rat Hole twice during our short visit to Bend! The food was fresh and fantastic and the beer very well put together. My favorite was the Honey Pale Ale, a fine example of what a British pale should be. Great place, make this one a stop when you are in Bend!