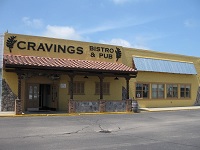 My wife and I stopped here on a Sunday afternoon while on mini-pub crawl. The bartender says the pub has been open for 3 years, however, it is just recently that they started brewing their own beers. The brewery is located very close to I-94 in a retail building next to Party City in a commercialized area near the shopping mall. It has a restaurant dining room that is separate from the pub area, and there is nice vibe in the pub. Food can be ordered in the pub. There is also a patio that is located just off the pub.

There were 8 Cravings' beers on tap, so we ordered a sampler flight to share so that we could try all 8 of them. For a relatively new brewery, they have their recipes very well dialed into the equipment that they use, and they brew some very delicious beers. The typical Blonde Ale and Wheat Ale with minimal flavor that is found in many breweries so that the macro beer drinkers have an option has very nice flavor here. There is more flavor in them than in an ESB that is brewed as a session ale here. All of the beers were brewed to style with some extra flavor characteristics that caused us to rate all of them at a score that is above average. Our overall scoring mechanism comes up to a 3.5, so a B- grade is where we rate the beers. We didn't put any of the beers into a 'notable' category, but all of them were very drinkable nonetheless.

Aside from the brewery's beer offerings, the pub also offers 21 other taps (including 2 macros and 3 ciders) that were mostly Michigan beers, and liquor along with a selection of wines are available too.

We only ordered an appetizer to go along with our beers, but the varied menu looked very good, so this would be a great place for a full meal and a few beers. Based on how good our appetizer was and the nice selections on the menu, I'm scoring this review as if we had eaten a meal here. If this pub was closer to where I live, I'd come here on a regular basis.

Cravings Bistro & Pub in Benton Harbor, MI
Brewery rating: 4.25 out of 5 with 1 ratings