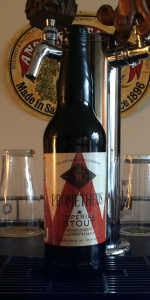 Appearance: pours a super dark brown, almost black, with some mocha colored highlights on the edges. The head on this beer is odd for a stout. Big sudsy bubbles that dissipate nearly immediately. Cola-esque. Beer looks very syrupy and viscous.

Aroma: heavy on the barrel, with some boozy heat as well. Packs a little bit of chocolate malt and some roast as well, but the woody barrel is strong with this one.

Taste: a very solid imperial stout flavor profile. Roasty as hell, with some softer chocolate highlights, along with some nice vanilla and bourbon flavors. As stated in the only other review for this beer, the barrel is super heavy, and it maybe gives off a bit too much wood for the base beer. There's a very subtle touch of unsteeped malt perhaps that's a little off putting on the finish.

Overall: a solid first go for a barrel-aged stout, and as far as I know, beer in general for Whaler's. Refine the base beer and this could be pretty darn good.

22oz. wax capped bottle served at 53 degrees in a tulip. Batch #1 bottled on 3/28/16 by WTS. Pours the color and clarity of cola with a tight, quarter inch, mocha-colored head that slowly dissipates towards the shoulders. Nose expresses notes of cocoa, ethanol and vanilla. Taste follows nose; however, the spirits overwhelm the other flavors. Mouthfeel is light-medium in body and comes off a bit thin for the style. Carbonation is mild and texture is slightly oily. There's also a mild acidity and a considerable ethanol burn that lingers at the back of the throat. Overall, a nice effort; however the barrel (I was told it was aged in Bulleit Bourbon barrels) is way too assertive and I'm not sure how this is going to age over time. The $15 price point makes it a little difficult to revisit this beer any time soon.