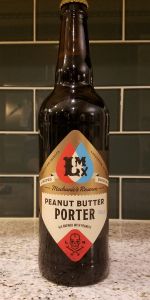 The aroma is grainy roasted chocolate malt and some peanuts.

The flavor is some cardboard malts with roast chocolate and some peanut butter. The mouthfeel is medium to full bodied with smooth carbonation.

Overall, I remember liking this more when I had it before. Maybe an old or bad bottle?

This beer was given to me by a coworker as a holiday present.

A&S: Half a finger of foamy/fizzy head that dies very quickly, leaving a ring. Globs of lacing hang on the sides. Semi lively carbonation bubbles rising to the surface. The aroma mainly contains roasted malts, smokyness, and coffee. Hints of roasted nuts. The peanut aroma is very noticeable when smelling from the bottle, but not as much from the glassware.

T&M: The taste consists of smoke. Similar to the aroma, the peanut part of the taste is not overwhelming which is great. Pretty smooth a creamy.

Overall: I'm impressed. I think this beer did an excellent job of incorporating peanut butter as a mild aroma and taste while staying true to it's imperial porter form. Not sure of the price, but if it's not over ~13$ I would recommend it as a try.

I wasn't sure if this would work, but it did. You get a nice peanut buttery smell up front, and the taste is just the same. It's not sticky or anything, but a nice alternative flavor added to a base porter to liven it up a bit. While everyone does coffee or chocolate, peanut butter works too. Good idea, and made me want to try other beers from them.

Easily one of the best peanut butter beers I've had!

I love peanut butter porter so I am excited how this local brew stacks up against my favorite. Porsche black with an inch of coffee-colored head. When held to the light you can see or red glow. The nose is of Peanut Butter Cup. Wow the first thing I got is the smooth texture. Has a very nice mouth feel, then you get a soft flavor of peanut butter cup. This is great. Will be having more as soon as possible. Highly recommended.

A decent porter but was hoping for more. Nice foamy pour with a typical porter taste. It was dark and rich but didn't get much for peanuts or peanut butter.

On tap at the brewery. Looks like your standard porter. Aroma is port, peanut butter, and peanuts. Flavor is more peanuts than peanut butter and its kind of sweet. I liked it but I wouldn't want to drink more than three to four ounces so overall it suffers.

From a 650 bottle (no date) to a snifter. This review is an update of a prior rating of the beer on draft.

A-An aggressive pour produces about one and one-half fingers of grey-tan head. Retention is pretty goad as the foam lasts a few minutes before dying off. The beer is almost black and still looking.

S-I sniff dark chocolate, some alcohol sweetness, but less peanut butter than I remember from the draft version that I tried a few years back. Somewhat average.

T-The taste is similar. I get some nice chocolate and grain notes that indicate a tasty, slightly sweet porter, but I am not picking up as much peanut butter as I would expect. I get a nuttiness on the palate, but not the almost-chewy flavor that I recall from before.

M-The beer is mid-weight with an active carbonation. A solid-feeling porter, but maybe a bit light for a peanut-butter beer.

O-Perhaps I am just misremembering this beer or maybe I got an old bottle, but I really used to like it more. It was a good gimmick and a tasty desert on draft. The bottle version falls just a little flat for me.