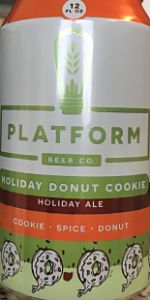 Not a bad Christmas beer but a bit thin for my tastes. Taste was more citrusy than I was expecting but that isn't a negative. Worth trying but not at the top of my list to be a holiday tradition.

Too tart for my taste. Went down almost like a shandy. I do taste the array of sweet and seasonal flavors - so some will enjoy the taste more than me. Ultimately this is a hair too experimental for a what appears to be a more reliable holiday release.

Flavor is of sugar cookie, donut, vanilla, nutmeg, and cardamom.

Decent holiday beer. Drinks pretty easy. The taste isn't super sweet and is pretty balanced. Worth a try or two.

Today is my (Un?)Happy New Jumping Off of the New Platform Beer Sunday (Week 755)! I have been redding up my house during my CANvalescence from surgery & putting together a number of brewery horizontals in doing so. I had planned, even before its announcement about its sale to A-B/InBev, to drink a buncha beers & a seltzer from Kleveland's Platform Beer Co. for this week's NBS. I was disheartened to hear of the news, especially having read the GI story. I am not one to boycott a beer due to their acquisition by a large corporation, but it did take some of the wind out of my sails.

I like these broad, generic Styles since they give me a good bit of latitude in CANducting my review. I CAN be more forgiving, plus I need not be hidebound.

I Crack!ed the vent open & in beginning a slow, gentle Glug, it seemed that the adjuncts were already well attenuated so I stepped up my rate of flow. I wound up with just under two fingers of dense, foamy, rocky, tawny head with great retention. Color was Deep-Amber/Light-Copper to Copper (SRM = > 13, < 17) with NE-quality clarity. Nose smelled like a spicy, perfume-y CANdle! 8=O Man, it was just alive with the adjuncts. This might not bode well, except that it is an "Herb and Spice Beer". Perfect! It was totes spicy! Mouthfeel was medium. The taste was very spicy, but the vanilla lent it a perfume-y sweetness that could have been omitted without any tears being shed. I really dug the interplay between the cinnamon, allspice & nutmeg, though. I was less enamored of nutmeg in the previous beer from them, but here, it fit in well. Finish was super dry, very spicy & as expected from a spice-adjunct-driven beer. Too bad that they allowed themselves to be subsumed or I would revisit this one with the double-boiler project this Winter. YMMV.

A- amber color that is quite clear. Minimal head

F- nutmeg and cinnamon dominate with hints of malts

A: The beer is crystal clear light amber in color and has a light amount of visible carbonation. It poured with a short white head that left a thin layer of bubbles on the surface after it finally settled down.
S: Light to moderate aromas of spices are present in the nose.
T: The taste starts out with a little sweetness and finishes with spicy notes of cinnamon and ginger.
M: It feels medium-bodied and a little smooth on the palate with a moderate amount of carbonation.
O: I thought that the taste of this beer had a good balance between the initial sweetness and the spiciness that follows.

I got a 6pck of this from my local meijer. It poured a clear amber with no head and no lace. The scent had ginger and cinnamon hints. The taste was nicely balanced and easy to drink with xmas spices, frankincense and myrrh. The mouthfeel was lighter in body with subtle carbonation. Overall it's an ok beer.

Collaboration with Brewnuts Donuts & Beer. 12oz can poured into a tulip. Pours a hazy glowing burnt orange; small off-white head that fades leaving decent retention and okay lacing. The aromas have lots of ginger leading the way. Some cinnamon and spices. Some caramel. Some orange, lemon and lime. Malts are there. The flavors follow the nose. More ginger leading the way. More orange, lemon and lime in the mix. Some cinnamon and caramel. Spice notes in the finish. It's not too sweet. Malts do their thing. Alcohol goes unnoticed. Mouthfeel is on the lighter side of medium-bodied with moderate to low carbonation. It's very fluffy and smooth.

This is an alright brew. I'm picking up ginger more than anything, although the spices do their thing. It's nothing too crazy, but it's not bad at all.

I've become a big fan of Platform brews, and though I used to live around there, I still haven't been to their pub. I need to correct that, and I need to get more of the Holiday Donut Cookie. It's damn festive!

It pours like a brown ale based spice ale but lighter and more orangy. The aroma is nicely balanced cookie and donut (maple?) that also permeates the taste. The finish is slightly boozy.

Holiday Donut Cookie from Platform Beer Co.
Beer rating: 82 out of 100 with 34 ratings