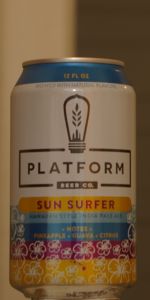 Good brewer, pretty good beer ... Definitely hits the pineapple and citrus notes .. would be an above average session beer for a hot summer day .. overall a bit too flat and "juicy" for me

I got a 6pck of this beer from my local Kroger store. It poured a slightly hazy golden with thin white head that is not leaving much lace. The scent had fresh fruit salad notes. The taste was nicely balanced and easy to drink with tropical fruit presence. The mouthfeel was lighter in body with good carbonation. Overall its a solid beer.

I did a brewery horizontal earlier in the year with Platform that cleared out my backlog so now it is simply a matter of keeping up with new releases and ones that previously escaped my survey. It does not hurt that they also go to the furtherance of The CANQuest (tm)!

I was curious as to the addition of those adjuncts, so I Crack!ed open the vent & CANducted a slow, gentle C-Line pour into the awaiting glass, holding my breath in hopes of achieving clarity as I went. Eureka! I got a brief finger of foamy, soapy, rocky, bone-white head with low retention, but c'est la guerre. Color, however, was a gorgeous liquid sunshine-like Yellow-Gold (SRM = 4 - 5) with NE-quality clarity & The Gelt Gang of Croesus, Midas & Mammon could not show up fast enough! 8=O Nose revealed that the adjuncts, NOT the hops, were the star in this one. It was redolent with tropical fruits, but it did not have the requisite bitterness for the style. Mouthfeel was medium. The taste was much akin to the nose - very fruity, very tropical, but not very much like what I would expect in the style. Pineapple was dominant, followed closely by guava. It was on the semi-dry finish that I experienced a light grapefruit bitterness, but I felt like it was too little, too late. 8=( YMMV.

Aroma is good, mildly tropical, though none of the fruits listed on the can. Lime zest and bubblegum sweetness, tiny bit of caramel malt.

12oz can poured into a tulip. Pours golden with decent clarity and bubbles racing upwards; creamy white head that falls slowly leaving great thick retention and sticky lacing. The aromas have subtle tropical notes. Pineapple, guava and coconut are there. Lots of crackers and fresh bread. Malts are there. The flavors follow the nose. More pineapple, guava and coconut. Hints of orange and lemon. Lots of fresh grass. More crackers and bread in the mix. Subtle sweetness. Moderate to low bitterness. Finishes juicy. Alcohol goes unnoticed. Mouthfeel is on the fuller side of light-bodied with moderate to active carbonation. It's sharp, fluffy, smooth and easy to drink.

This is an alright IPA. It does have a "Hawaiian" vibe going on, but it still drinks like a real beer and not a fruity beer, which I appreciate. It might not be anything super crazy, but it's very refreshing. Not bad.